To support its successful manatee care and rehabilitation program, ZooTampa has purchased a new Shuttlelift SCD09 carrydeck crane, replacing an older Shuttlelift crane that served the program’s staff for over 20 years. 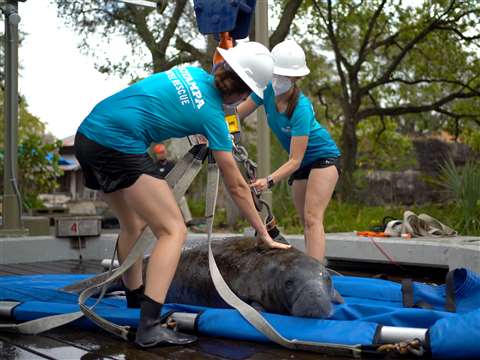 ZooTampa staff and a manatee at the zoo’s care center facility. On average, the zoo admits 30-35 manatees into its hospital each year.

ZooTampa’s David A. Straz, Jr. Manatee Critical Care Center has looked after more than 500 seriously injured, sick or orphaned manatees, returning more than 280 of them back to the wild. For the past 20-plus years, its trusty but aging 8.5-ton Shuttlelift 3330E was used to carefully handle the stretchers containing these vulnerable creatures whenever they needed medical care and rehabilitation.

“We need to weigh the animals pretty regularly to monitor whether they’re gaining enough weight — they should eat about 16 percent of their body weight daily,” Lippincott said. “On average, manatees weigh about 1,500 pounds, and can move pretty quickly when they want, so it’s important that we do what’s best for both them and us. We would not be able to function as a hospital without this crane.”

With 13 manatees currently in different stages of rehabilitation at the facility, the Shuttlelift’s Rated Capacity Limiter (RCL) provides an extremely useful function, conveniently displaying the calculated load on its full-color, graphical display. Although the center recently rescued a “tiny” 43-pound newborn calf, some of its largest past patients have weighed upwards of 2,500 pounds making their handling and transport the utmost priority, the company said.

Manatee handling with a carrydeck crane

Given the small number of crane operators who switch to a career in zookeeping, several of the ZooTampa staff have recently received training and NCCCO certification in operation from nearby resources.

“We learned a lot on the job with the 3330E over the years, practicing without animals to begin with, but Sims Crane, our local Shuttlelift dealer, has made sure that we know everything about properly operating the crane,” said Lisa Dijenno, animal care supervisor at the zoo.

“But a lot of what we do isn’t really something that can be taught,” added Lippincott. “So, we’ve spent a lot of time working with each other to figure out the best way to handle a manatee, to ensure its optimum well-being. Having a wild animal on the front of a crane can be dangerous, so we usually meet as a team beforehand to discuss how we’re going to move them adequately — and what our backup plan will be if it goes wrong.”

With so much at stake, the easy operation of the SCD09 — enabled by features such as the easy-to-set-up graphic RCL system, automotive-style dash panel, and hydraulic joystick control — is a welcome bonus for the ZooTampa staff. 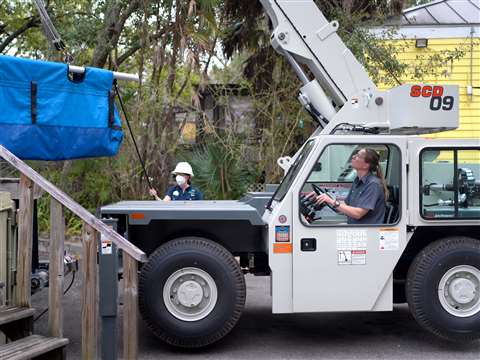 “Not only is the crane pretty intuitive to operate, but it’s also the perfect size for our needs,” Dijenno said. “It’s also pretty quiet, quick and efficient, which is really helpful when we need to move the animals as fuss-free as possible. And with its compact frame [19 feet 7 inches long by 7 feet 3 inches wide] and three steering modes, it’s really easy to maneuver around the small area that we have, making sure we can quickly and efficiently move manatees between the truck and the pool.”

On average, ZooTampa admits 30-35 manatees into its hospital each year, although this figure is unfortunately increasing. And with its staff being on call 24/7 to receive stricken animals, its new 9-ton Shuttlelift SCD09 is of vital importance in ensuring timely treatment, explained Lisa Dijenno, animal care supervisor at the zoo.