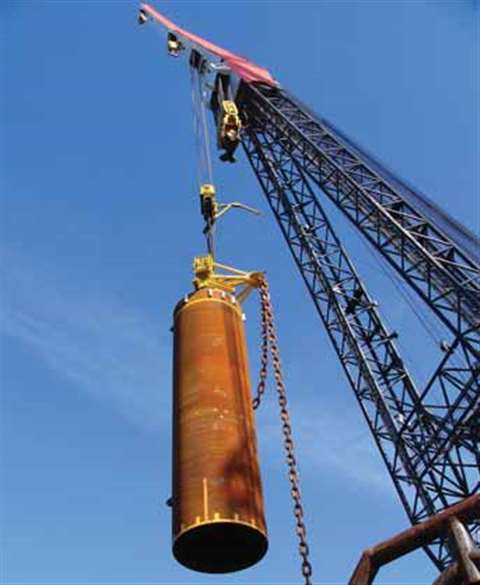 Fees van Zandwijk, senior technology advisor at Heerema Marine Contractors in the Netherlands, spoke to IC about the future of offshore lifting vessels in some of the world's most inhospitable locations.

One such setting is the Arctic Ocean where a large number of oil and gas fields lay untapped due to the sub-zero temperatures. Van Zandwijk explains that technology is still to be adapted in order for crane vessels to work effectively in minus 30 or 40 degrees centigrade environments.

There are other “Arctic aspects” for which the vessels must be adapted, says van Zandwijk.

The extent to which the hull can sustain ice forces greatly affects the workability of the crane vessel in such conditions. Vessels designed to withstand light ice loading, or none at all, must be withdrawn to an ice-free area as soon as it appears. In the Artic Sea, light ice may even occur periodically in the summer.

Another consideration is the crane vessel's workforce.

“The working environment of personnel must be winterised, providing shelter and heat to create comfortable working conditions. Where work in the open air is unavoidable, for example, loading supplies from other vessels or mooring cargo barges, work areas must properly be de-iced,” explains van Zandwijk.

Studies are ongoing at the Shtockman Gas Field, in the Russian Barents Sea, 550 km offshore from the coast of the Kola Peninsula, where the water depth is 330 m. As with other potential sites there is an annual three-month window during which work must be carried out. As a result, fixed or floating platforms may be superseded by massive underwater structures or pipelines, avoiding the ice.

“The implications for cranes is that they would need to place heavier structures to great depths.” Van Zandwijk foresees the traditional crane boom being phased out in such environments, for some applications, and replaced with deep water lowering systems.

“There is no need to go in the air only to have to lower the load to 500 or 1,000 m depth. Maybe the housing and boom will go, but the hoist will remain.”

Decommissioning projects have also become a mainstay of the offshore lifting sector, with an abundance of platforms, either being completely dismantled at sea or, brought to land in large segments for cutting on the dockside, followed by recycling.

Unpredictable offshore weather conditions, however, make the former option a more dangerous one, according to van Zandwijk who prefers the heavy lift option, in which large sections are brought to land.

“Decommissioning must grow and cranes will have to have greater capacity in the future. There is sufficient capacity now, but the workload will increase in coming years.”

An example is the Ekofisk development, the largest of its kind in the North Sea, with up to 50 platforms. Nearly 40 years after they first started work, Heerema is decommissioning eight small platforms there, with a similar project for six to 10 platforms, including decks and modules, being planned.

The company also plans to extend its deep water capabilities to 3,500 m. So far Heerema has installed 220 tonne suction piles to a depth of 2,440 m with its deepwater construction vessel Balder, using the starboard crane to lower the piles to the seabed.

The work was carried out at the Independence Hub, a central floating gas production platform in the Gulf of Mexico, connecting nine gas fields run by different operators via a 283 km network of subsea flowlines.

So much hoisting wire rope was required that the original drums of the crane's hoisting system were found to be too small. The torque capacity of the drums was also severely reduced by the thick package of wire on it. Heerema decided to replace two original drums on the Balder's starboard crane with traction winches, along with two large storage reels on the roof of the crane house.

“Traction winches have the advantage that the pulling function is separated from the storage function. A traction winch works on the principle that an indefinitely long wire is wrapped a number of times over a set of sheaves. A small pulling force at the tail end of the winch allows a high pulling force, for this crane 50 tonnes, at the hoisting end.

This is exerted by the storage reel, the low force allowing a thick package of wires to be stored on the drum,” explains van Zandwijk.

The full length of the wire reached 19 km in each winch, limited only by the maximum weight the wire spinning machines could handle. This allowed a lowering capacity of about 500 tonnes at a 2,440 m water depth, more than enough to install the Independence Hub suction piles, van Zandwijk adds.

Heerema is planning to replace other drums on the Balder with traction winches, which would allow 72 km of wire to be contained in the hoisting system. The upgrade would increase lowering capacity to 1,000 tonnes in 2,440 m of water or 400 tonnes at 3,500 m.

“The water depth of 3,500 m is presently the design horizon for the coming 10 to 15 years. It is the water depth at which oil and gas resources have been explored and discovered today,” van Zandwijk says.

Work is underway in the offshore industry to develop the fibre rope, which is set to revolutionise the deep water lifting sector. “The deeper you go the longer the wire and the more the wire capacity is consumed by the weight of wire itself,” explains van Zandwijk.

Fibre ropes, made up of carbon-like fibres are as strong as steel, but have a neutral weight in water, meaning no lifting capacity is lost. “Steel wires become increasingly ineffective beyond 3,000 m water depth. At that depth, 50% of the hoisting capacity on the vessel is lost in carrying the huge weight of the wires themselves, leaving only 50% of the total capacity for the load at the hook,” van Zandwijk adds.

There is still some way to go, however, to overcome fatigue experienced by fibre ropes as they wind through the sheaves.

And there are other problems says van Zandwijk, in that some of the wire types have a low stiffness, which may require a complicated design of traction winch, with individually driven sheaves. They are also sensitive to mechanical impact and UV light. “Efforts are going on to develop integrated lifting systems reconciling the specific demands of fibre ropes with offshore lifting requirements.”