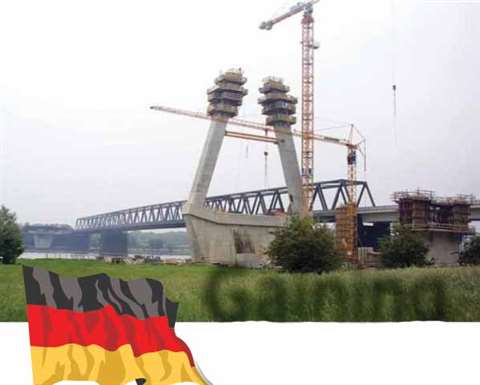 The German Construction Market Today is vastly different compared to just five or six years ago when recession hit the industry hard. Last year was the first since those days that the industry returned to growth and, according to the European Construction Industry Federation (FIEC), the step change is set to continue. In its 2007 Construction Activity in Europe report, FIEC said that the economic research institutes expect real growth rates for total German construction output between +1,2% and +3,9% in 2007.

"All major fields of activity contributed to growth in 2006. Residential construction, led by home ownership activities, grew in line with the whole market by +3,6% in real terms. Public construction (including building as well as civil engineering) rose by +1,6% after a heavy drop of -35% since 1994.

The growth was led by commercial construction (building plus civil engineering) with a positive trend of +4,7%," the FIEC report stated. It added, "It seems that investors have rediscovered Germany as an attractive investment IOCati0n'"

Mr Weitz added that figures for the German residential construction market are currently very weak, which he attributed to high activity in 2006.

He explained, "First of all the public subsidy to private house owners was cancelled at the end of 2005, so this boosted finishing of any work in 2006. Secondly, there was a rise in the VAT rate which rose from 16% to 19% on 1 January 2007."

Mr Weitz said that many private investors wanted to avoid the +3% jump in VAT and so concentrated their activities in the last year. He predicted that the residential market in 2007 will stabilise and flatten out to zero later on in the year.

He added that the positive German economy has also impacted on the public construction sector, which is forecast to grow between +4 and +5% this year. He told CF that this growth appears especially high when compared with the negative figures of the past five or six years.

An increase in infrastructure work is expected in the country due to a very high and very sharp rise in tax receipts in 2006, which is expected to continue to rise in 2007, he said.

Sales revenues of German construction firms, between January and May 2007, have risen by +7,9% compared to the same period in 2006.

However, Mr Weitz said that this figure has been exaggerated by unusually high construction activity in Germany during the first three months of the year, due to the very warm weather. He added new orders for German contractors between January and May 2007 compared to the same period last year were +9,6% higher.

Interestingly, Germany has been beaten for the first time as the largest market in Europe. Spain is set to see construction output of € 217 billion this year, according to Euroconstruct, a group of economic forecasting companies, reviewing 19 countries across Europe. Compared to Germany's

For the first time in several years, construction equipment manufacturer, Liebherr, saw strong growth in Germany in 2006, according to a company spokesman.

A focal point for investment in 2006 was the measure to increase capacity of existing production sites. This year Liebherr introduced several new mobile crane models including the new LTF 1045-4.1 and LTF 1035-3.1 truck-mounted telescopic cranes.

A spokesman for Liebherr said, "These cranes are designed to be operated on series-production truck chassis and are of particular interest for German customers."

With these two new models, Liebherr says it is providing crane operators with an economic alternative in the 30 to 50 tonne load category.

"Their axle loads are much lower than those of all-terrain cranes, which has a positive effect on registration options. Both LTF cranes, for example, meet the requirements for an unrestricted long-term vehicle permit in Germany," the spokesman said.

Paul Burger, the international general sales manager for Hitachi Construction Machinery in Europe, said that the German market was currently very healthy and has been growing for the past 24 months. As well as mini-excavators and wheel excavators, Hitachi supplies the German market with crawler excavators up to 500 tonnes, rigid dump trucks and wheel loaders, as well as special attachments.

Speaking to CF Mr Burger said, "The market in Germany has grown spectacularly but some segments are overheating at the moment, particularly the mini-excavator market because that's almost up +100% compared to 36 months ago - it is at a level where it has never been before."

He added that with current levels of demand, the company has struggled to keep up with the growth in the market.

"We are selling more but the market shares are not growing as well as our sales numbers," he said.

Mr Burger told CFthe company's strong business partnership with German dealer Kiesel, has been the key to the success for Hitachi in the German market.

He is convinced the company will experience double-digit market shares by 2008 adding that some crawler excavators had already reached this target. Mr Burger added that Germany's high dependence on wheel excavators meant that the company needed to expand their share in this market.

In order to keep up with demand, the company plans to double the size of its crawler and wheel excavator production plant in Amsterdam for the European market.

Mr Burger added that Germany is one of the most complicated and demanding markets in Europe, which he attributes to demanding customers and dealers as well as the fact that prices are under pressure

The German construction industry turned a corner in 2006 and has continued to see growth during 2007. Industry commentators and manufacturers agree that more progress looms on the horizon. However, there are concerns that certain segments of the market are overheating, but as yet, experts do not predict that these industries will crash.

For the time being, at least, it appears that the German construction industry is back on track and although manufacturers and contractors are welcoming the new surge in activity - meeting the demand is still a challenge for some.