Hurdles ahead for Europe 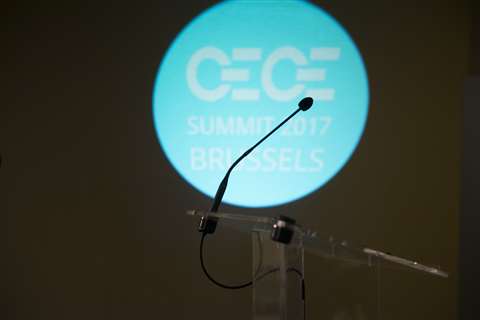 The mood was relatively positive at the latest Committee for European Construction Equipment (CECE) Summit, held in Brussels, Belgium, which heard that the economic environment within Europe – and indeed beyond – had been showing signs of a slow but steady recovery.

However, it is clear that there are several hurdles to be overcome along the way.

At the economic forum, moderated by the editor of Construction Europe, Sandy Guthrie, the main buzzword was uncertainty – which, it was said, stood as both a challenge and an opportunity.

Brexit, the German coalition, unrest in Catalonia, the Trump administration’s position on global trade, tensions with Russia, concerns raised by the International Monetary Fund about political tensions – these were all pointed to as sources of uncertainty and examples of the recent rise of populism and isolationism, perhaps driven by the refugee crisis. And uncertainty is bad for business. 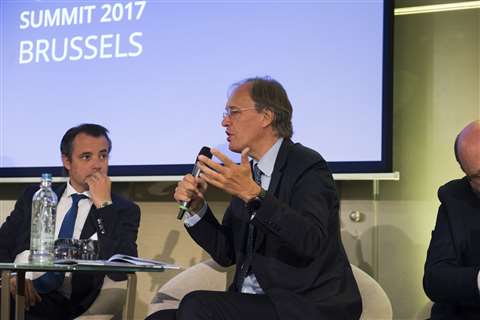 Collignon (centre), “Constraints are an inevitability”

Prof Dr Stefan Collignon, professor of political economy at Sant’Anna School of Advanced Studies, said that when faced with uncertainty, it was natural for companies to have a liquidity preference, causing them to hold money rather than invest it. However, investment is required to stimulate growth. Indeed, anti-cyclical investment was advocated by a number of those speaking at the forum.

Therefore, it is necessary for the European Union (EU) to provide greater stability – along with efficiency and equity – according to Collignon. He said, “We need to put in place the political structures by which we can actually manage the economy and other public goods – like security, immigration, border control, investment, structural reforms, and research and development – so that we will jointly benefit from this system that we have.

“That is our task. That is how we should tackle globalisation.”

In this way, Collignon argued that an environment would be created in which businesses would be able to work to overcome the constraints that are present in the market.

The topic of constraints, however, heated up the debate during the panel discussion. While Collignon suggested that constraints were an inevitability and it was the business of companies to overcome them, the manufacturers responded by saying that the constraints put on them by EU regulations were stifling.

Enrico Prandini, managing director of Komatsu Italia Manufacturing and first vice president of CECE, likened the EU to a caring mother who withholds treats. He said that while it provided stability and helped free trade, it also over-regulated the market for equipment manufacturers without compensating them for the resulting costs incurred.

Prandini asked who was paying for the improvements made through research and development in response to regulations such as emissions tiers. He argued that companies needed to get a return, in order to maintain a balance, and if the cost could not be passed on to the customer he suggested that the EU should perhaps foot the bill. 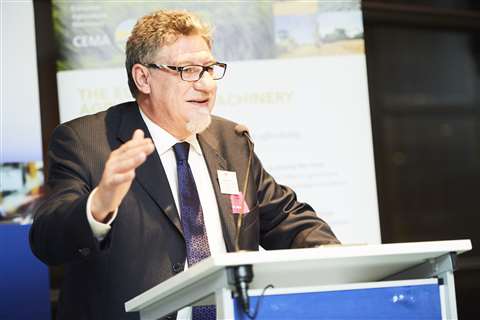 With that said, Niklas Reinedahl, global director of industrial strategy at Volvo Construction Equipment, noted that there was a pull from the market, since the more efficient equipment helped companies to achieve their goals, such as reduced carbon emissions. So perhaps the costs would be covered by the customer after all.

However, the issue with regulations that Reinedahl stressed was that they were driving complexity, which was a challenge for businesses. Alexandre Marchetta, vice president of Groupe Mecalac, and Prandini echoed this concern, saying that with the variation in emissions regulations across different regions, companies were having to keep large stocks of different types of engine. And there was the worry that, as a result of Brexit, another regulatory zone could emerge in the UK, further complicating the picture.

They said this made it difficult for equipment manufacturers to compete outside the European market. However, this might encourage the manufacturers to put more emphasis on the domestic market, within the Union, which Vladimiro Giacché, chairman of Centro Europa Ricerche, recommended as an important element in the European construction industry’s recovery process.

There seems to be scope for manufacturers to focus more on the domestic market. Chris Sleight, senior consultant at Off-Highway Research, said, “I wouldn’t be surprised if I stood in front of you next year and we found, for the first time since 1994, that Europe had become a net importer of equipment.”

As demand within Europe has increased since the crisis, production has not been keeping up with it.

Returning to the topic of engine emissions, Reinedahl pointed out that they paled in significance when compared to total jobsite efficiency.

Marchetta seconded this, saying that the current focus of regulations on machines put all the pressure on manufacturers, which was unfair considering the scale of inefficiencies across the entire jobsite. He said the scope of regulations needed to be widened. However, the trouble is that this might be difficult to implement – enforcing regulations on engines is more straightforward than doing so for a whole jobsite.

Another concern, raised by Taco van Hoek, director of the Economic Institute for Construction & Housing in the Netherlands, was that of the labour shortage.

He said the market had been trying to recover from the loss of workers during the crisis. However, van Hoek suggested that labour-saving technologies might hold the answer.

That leads to the subject of digitisation, which Riccardo Viaggi, secretary general of CECE, flagged up as a particularly big issue, saying, “If we don’t lead, we will be led. We will be followers.”

It was stressed at both a CECE dinner debate ahead of the Summit, and at the Summit’s technical forum, which was moderated by Malcolm Kent, senior technical consultant at the UK’s Construction Equipment Association, that a joint European approach was needed to develop a world-class digital construction sector. 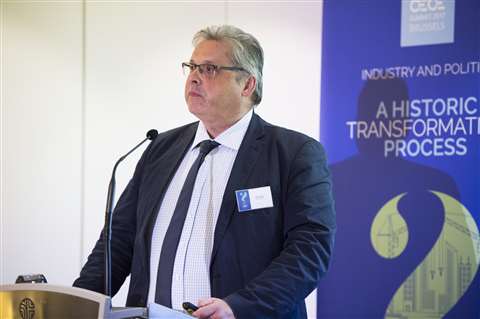 Geert Maes, senior manager of the standards department CEN-CENELEC, said that digital networking solutions must be developed and standardised to make it possible for all decentralised parties on a construction site to fully co-operate.

For this, is was suggested that the EU and its member states would have to create a digital framework, such as high-speed data lines and open standards for data exchange, at the same time as investing in the improvement of people’s digital skills.

In order for the European construction industry to remain competitive, it was said that companies would need to adapt their organisations, further digitise their machines and operations, and promote open innovation in the process.

Big data solutions could become a critical factor in differentiation, and a major driver of value creation in the coming years.

Of particular importance is building information modelling (BIM), which was said to have the potential to trigger the digital transformation of the construction site. It is expected to accelerate the deployment of smart, connected construction machines.

It was also said that BIM could change business models considerably. As machines become more transparent as a result of digitisation – their performance, breakdowns and costs becoming increasingly visible to the customer – manufacturers will have to invent new strategies in order to cope.

With the rise of big data, there comes the increased risk of cyber-attacks. Lanfanco Marasso of the European Cyber Security Organisation said companies needed to incorporate cyber safe technology into their processes, to support digitally-built environments such as intelligent buildings and smart cities.

Again, a unified approach – a Digital Single Market – would be required to create a framework for managing such security risks that affect built assets.

One encouraging sign of a unified effort is the European Commission’s upcoming proposal on the completion of the Single Market for off-road machines, which was broadly welcomed by the speakers at the CECE dinner debate.

The Commission aims to achieve this by creating one single approval system that will authorise mobile machines for road use across the entire EU, without imposing further national technical requirements, which are seen as cumbersome.

“This will greatly benefit customers and boost the competitiveness of Europe’s agricultural and construction equipment industries.” 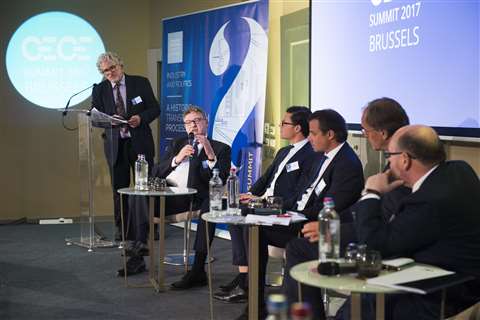 From the left, Guthrie, Prandini, Reinedahl, Marchetta, Collignon and Giacché