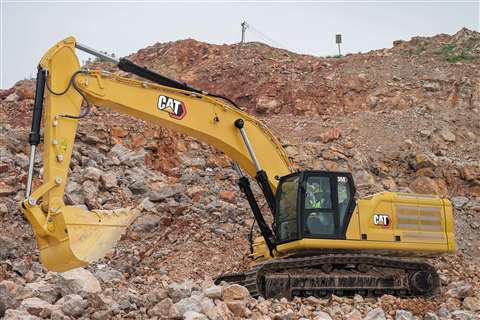 Italian mini crane manufacturer Jekko has launched the SPX650, a medium-sized electric mini crane, which the company says bridges the gap between its SPX532 and SPX1280 models. The crane utilizes proven technology from both these cranes, as well as introducing new features.

The SPX650 has a maximum lifting capacity of 5.5 tons. The five-section main telescopic boom has a maximum working height of 54 feet and a maximum outreach of 46 feet. The boom has 360 degrees continuous rotation within a minimum stabilization area of 9.5 by 9.5 feet and can be used in either hook mode or winch mode.

With its hydraulic jib, maximum outreach is 65 feet and it has a reachable height of 77 feet. The hydraulic jib offers up to three extensions (one hydraulic, two by chain) and has a maximum capacity of 1.3 tons. A negative jib angle of 15° is possible for greater application versatility. A shorter, two-ton runner jib is also available. This runner jib is particularly suited to applications such as glazing installation, says Jekko.

The jib can be stored in three different ways: at rest on the column; on the ground; or under the main boom. When stored under the main boom, installation and disassembly times are as little as three minutes, says Jekko, aided by its plug ‘n’ play design.

The SPX650 utilises the SPX1280’s proven X-pattern outrigger system which can extend to provide a stabilisation area of up to 15 by 15 feet. The stabilizers can also be adjusted with up to 72 degrees of swing. Stabilization software ensures the maximum safe working load for any configuration.

Designed for use both indoors and outdoors, Jekko says the SPX650 is suitable for a wide range of applications. Its tracks can extend outwards enabling the SPX650 to provide pick and carry functionality for lighter loads.

Crane operation is via the same in-house designed remote control as found on the SPX532 and SPX1280 and is backed by Jekko’s J-Connect remote monitoring and assistance technology.

The crane has a three-phase 16 kW engine electrical which is powered by a 48 volt lithium-ion battery with a capacity of 400 Ah. Using a high power 400 volt charger the battery can be fully charged in three hours. Using a regular 220 volt domestic power source this takes nine hours, via the onboard charger, although the crane can be used whilst being charged.

In 2021 the SPX650 will also be available with a diesel engine paired with three-phase electric motor, Jekko says.

The crane’s hydraulics use the same PVG 16 proportional bank valves from Danish multinational Danfoss as found on the SPX532 and SPX1280. The hydraulic system has a load sensing piston pump which is driven by Jekko’s own power management control. The company says this offers all the power, speed, and control the operator needs with the minimum power consumption required.

“The idea behind new SPX650 comes from the market needs,” comments Alberto Franceschini, Jekko export sales manager. “Our customers were looking for medium-size mini crane… that can work both indoor and outdoor and is suitable for many different job sites. We analysed both what the competition was offering and our own range, and the result is SPX650”.

Jekko expects the new crane to account for between 15 to 20 percent of its total sales turnover over the following year.