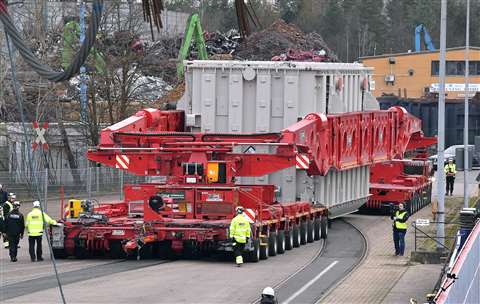 The Kahl Group in Germany, already well known for handling challenging transport operations, has excelled itself with the transport of a transformer weighing more than 500 tonnes.

Kahl used Goldhofer modules and a girder bridge to move what is claimed as the world’s most powerful transformer, a Siemens 1100 KV UHVDC, with a deadweight of 535 tonnes.

At the early planning stage the team at Kahl realised that the operation was going to be a new record load. Weighing in at 875 tonnes, the loaded rig was 63 metres long, 7.45 m wide and 6.10 m tall. Just before 22.00 hours on 24 January André Krause, Kahl Group project manager, gave the go-ahead for the heavy-haulage operation to roll off into the night.

“This transport solution is a first in terms of the combination employed. With Goldhofer’s heavy-duty and self-propelled modules coupled in parallel we were able to minimise the overall length of the combination so as to guarantee the manoeuvrability needed for the critical passages, like the underpass under the Minerva Bridge in Nuremberg”, said Krause.

The equipment used was two Goldhofer modules: up front a THP/ST 10 P (1+1) and at the back a PST/SL-E 10 P (1+1) coupled in parallel with the G2 I K600 high girder bridge from Goldhofer and Greiner. Kahl got the first unit of the G2 I K600 high girder bridge in May 2015. According to Goldhofer, its deadweight to payload ratio is key to reducing axle loads when transporting extremely heavy cargos and this is a unique selling point for the heavy haulage industry worldwide.

The maximum configuration of the G2 I K600 is 2 x 24 axle lines and the payload is 600 tons. In addition to its use as a high girder bridge the G2 I K600 can also be configured as a side girder deck, vessel bridge or self-supporting Schnabel transporter.

To help with planning the route, Krause used Goldhofer’s easyTRACK and easyLOAD software. While it is a valuable tool, an unforeseen issue presented itself at the start of the move, Kahl said. With the cargo secured in the high girder bridge using more than 30 chains and just starting to move off, an obstacle was discovered just outside the exit from the Siemens plant in Nuremberg.

A truck was parked leaving insufficient space to pass but a tow truck soon arrived and moved it out of the way so that, although narrower than originally calculated, there was enough space for the rig to pass. After that there were no other incidents and the cargo reached the port of Nuremberg the following morning in just under 20 hours.

André Krause, continued, “Once again the months of preparation paid off. Of course the occasional adjustment had to be made on a couple of bends, but without the illegally parked truck we would have arrived right on schedule.”

At the port of Nuremberg the transformer was loaded onto a barge to take it to Antwerp after which the 3,300 km journey to China continued by sea.

Krause said the move “was a successful premiere for us; we have another three of these giant cargos coming up for the power gen industry.”