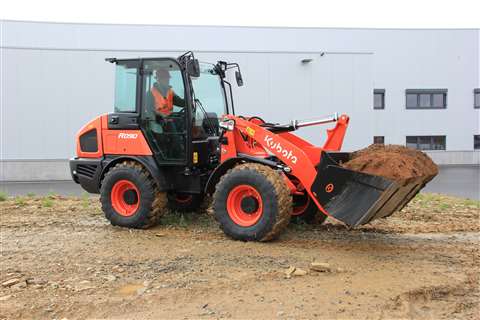 Both loaders have been the result of complete redesigns inside and out, and feature fully enclosed glass cabins for improved visibility, as well as a more ergonomic control layout than former models.

On the left side of the cabin a full glass door has been installed and, along with a wide opening window to the right of the operator, visibility is greatly improved. The rear window is also said to offer an unobstructed view when reversing.

A new Delta lift arm design has been added to both new models, allowing the operator to easily see the hydraulic quick-coupler pins and the hydraulic piping has been rerouted improving visibility of the toe during pallet fork operations.

While built for comfort, the machines, according to Kubota, have also been built for safe and simple operation, even by operators with no loader experience.

Both machines are said to have longer maintenance intervals than their predecessors and, with this powertrain set-up, the R070 outputs 50.8PS (37.9kW) and the R090 outputs 64.3PS (48.1kW) of power.