ALL Crane relied on Liebherr cranes to place a bridge span in an ambitious time frame for a project in Cleveland, Ohio, USA. The LTM 1450-8.1 and the LTM 1250-6.1 mobile cranes were the cranes of choice for the construction of a new hiking and biking bridge in Cleveland’s Wendy Park as part of an expansion of the Ohio & Erie Canal Towpath Trail. ALL provided several pieces of equipment for the job site, including various aerials and a forklift, but the stars were the two cranes used to set bridge spans and the final arch that topped off the structure. 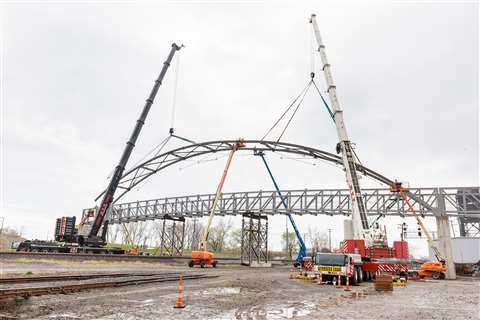 With the clock running, crane operators held each arch piece in position as a dozen ironworkers, six in man lifts and six on the ground, swarmed the area to install scores of bolts at critical splice points.

Plans for the lift were submitted months in advance to Norfolk Southern Railway, owner of the tracks and ALL specified the cranes. When the approved work time finally came, the team on the ground would likely have just an hour to complete the placement of the arch. That is usually the maximum amount of time a railway operator can halt train traffic for lifting work to be performed. When the predetermined hour finally arrived to set the two arch sections, nearly eight months of planning came down to 60 minutes. The LTM 1450-8.1 was configured with 157 feet (48 meters) of main boom at a 49-foot (15 meter) radius and the maximum of 134 tons (122 metric tons) of counterweight. The LTM 1250-6.1 had 131 feet (40 meters) of main boom at a 32-foot (9.8 meter) radius. 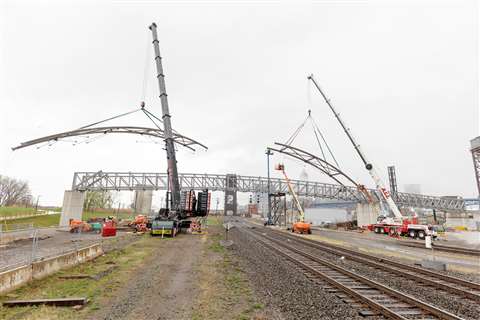 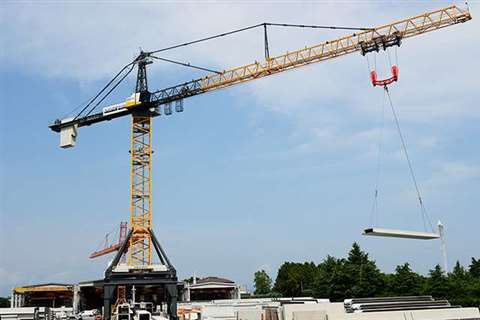