Mammoet moves bridge in the night 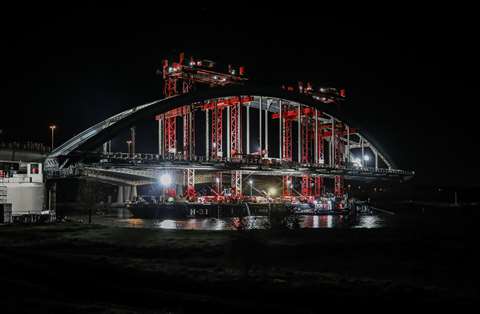 The bridge arch weighed 5,000 tonnes and was approximately 30 metres high. To complete the job, Mammoet built a large gantry system that would support and lift the arch.

Eight masts were mounted on a pontoon placed under the bridge, which were linked to the eight lifting towers on the bridge. The pontoon took over the weight of the bridge at high tide.

Mammoet cut the steel arch construction into pieces in the outer harbour of the Princess Beatrix lock, near Utrecht in the Netherlands.

With the bridge small enough to pass under the adjacent Jan Blankenbrug bridge, it headed for final demolition at the Mammoet shipyard at Schiedam, in the west of the Netherlands. There the steel will be reprocessed into raw material.

Paul van Gelder, Mammoet CEO, commenting on the project on social media, said, “Not an easy job due to the design of the bridge. But it was done safely and professionally by a team of different companies having the same objective. Well done everybody.”

Since the opening of the two new Lek bridges for the A2 motorway near Vianen, the arch bridge no longer has a function. In recent years, various options have been explored for reusing the bridge, both in its entirety and in parts, both at its current location and at a possible other location. None of these possibilities turned out to be feasible. 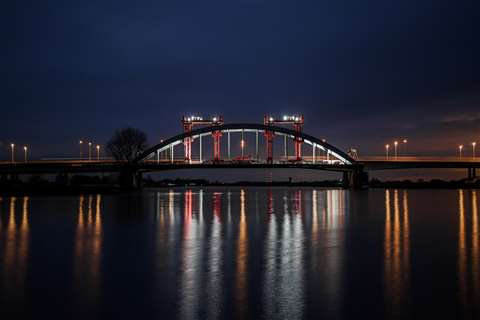 As two new bridges have opened, the arch bridge no longer had a function

The departure of the arch bridge attracted a large audience digitally and on location, and about 6,000 people watched the live stream.

Rijkswaterstaat, the Dutch government agency responsible for public works and water management, is working on a memorable monument for the arch bridge.