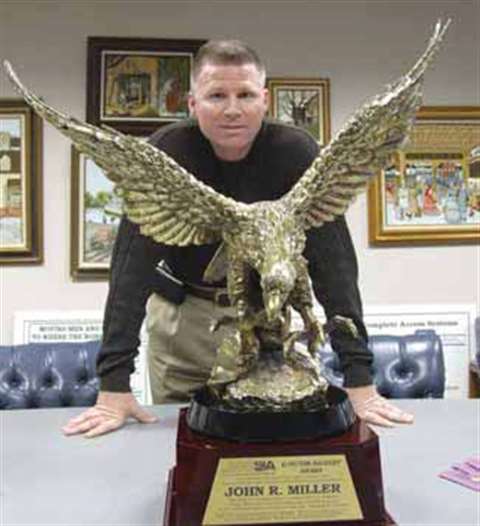 John Miller, president and COO of Millstone, at his office in Upper Marlboro, MD.

With notable projects such as the White House and Capitol Hill, Millstone Cos continues to grow as one of the largest scaffold and access contractors in the US. John Wyatt talks to its president John Miller in Upper Marlboro, MD

Still just 46, John Miller, president and COO of Millstone Cos. – and also president of the Scaffold Industry Association (SIA) - has muscled through three recessions and thrived in the recent good years. As a subcontractor that works in the Mid-Atlantic regions, operating from Baltimore to North Virginia to Washington, he runs three companies – one for sales and rental of scaffolding, one renting hoists and suspended platforms, and another supplying labor - under the Millstone holding company run out of Upper Marlboro, MD located just outside of the nation's capitol.

The group has 30,000 pieces of scaffold equipment and, according to Miller, the “largest construction hoist fleet” in the US, with 96 units. Millstone has leased its scaffolding and construction hoists to several preservation projects in Washington D.C. Commercial and industrial new construction continues to be quite strong closer to Baltimore, as well.

Yet, Miller knows a “softening” economy when he sees one: he's a student of the “look, listen and learn” maxim, knowing when to tighten the belt at the heels of a downturn. He recalls the late '80s/early '90s when a major recession hit and Millstone had just built its office/warehouse facility in Upper Marlboro, MD.

“We had two growth spurts in the 80s, where we decided we needed to have our own building. Of course, by the time we moved in, there were signs the market was starting to turn downward,” says Miller. “In those days, I was buying equipment from the factory and it wasn't coming here, it was being shipped to the job. It looks a lot different on paper inventory, but when you get the cold hard steel asset and next thing you know you got a warehouse full of scaffolding and a big mortgage for the building, it keeps you on your toes working hard.”

Even though he says business is still strong, Miller says the forecast for this year signals a downward turn.

But it seems his big concern at the moment is the work force. He says the younger generation has no interest in construction. “As far as rolling up your sleeves and getting your hands dirty, I don't see this new generation doing that.”

He says the SIA, which he currently serves as president, has been working to develop training programs to entice younger workers into the industry. “But if you remove the immigrant population from the construction industry right now you're just not going to get it built,” says Miller. It's going to be an interesting year for Miller and the three Millstone companies: Millstone Corp sells, rents and leases scaffold and access products and represents Waco Scaffolding out of Cleveland, OH; Millstone Enterprises is its suspended scaffold and motorized hoist division; and Millstone Erectors is the labor division.

In regards to maintaining the fleet, it appears Millstone has a pretty good operation. Millstone has a factory trained and certified Champion Hoist (Champion is the Houston-based hoist manufacturer now owned by Alimak Hek group) technician who oversees a staff of four mechanics. Before any hoist goes out to a job site, the unit is serviced and load tested.

“We also demand a monthly service contract because my clients don't have a certified mechanic. My guys go out once a month to make sure the equipment is safe, and to protect the equipment for longevity purposes. There's a 16 point checklist that we review during these monthly visits,” Miller says.

In addition to his full plate with the Millstone companies, John Miller is busy with SIA activities. He was named President, the 18th for the association, at its annual convention in Baltimore in 2006. This year Miller will pass the title over to Bill Breault, of Breault Industrial Group in Portland, OR. Yet, Miller is not quite done as he moves to now serve as the Immediate Past President.

Miller's history with the SIA dates back more than 20 years when he first attended one of its conventions in the mid-80s and quickly found a community he could relate to, he says. “You go to your first few meetings, you quietly listen, and then someone says something that's contradictory to your position, or you have a different view. The next thing you know, you raise your hand, talk, and then you're part of the process. Then the next meeting you see there's progress and you're more involved,” he says.

What achievements he is proud of as president? He cites two episodes: “The number one is the re-establishment of the SIA as the voice of the scaffold and access industry. It had lost its voice for a while, and that voice is now back, it's amplified. We have friends in OSHA and the Dept of Labor that are ready and enabled to go to work on behalf of the scaffold and access profession to ensure safety. We had a very large part in getting them back on board. We had lost our contacts in that office, with people moving on and retiring.”

Second, when he first became president and began reviewing the account books, he discovered there were close to 200 members out of 824 that had outstanding membership fees not paid. Over three months, Miller gathered these companies up, gave them the opportunity to pay up, and said goodbye to those that didn't. However, as of this January's SIA Committee Meeting in Scottsdale, AZ (see sidebox) there are now more than 1,000 members on an international level.

“We're embracing new membership. Our international membership is growing in leaps and bounds – I think it was up 40% last year – because the international community is trying to get in to the US market and to get there they want to come through the SIA and be a part of it,” Miller says.