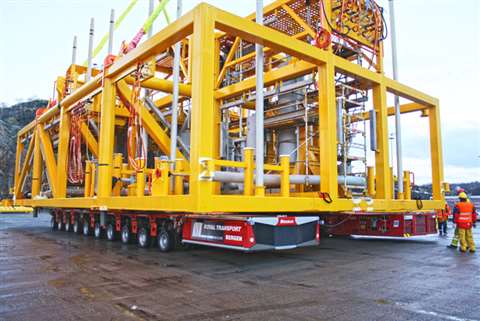 Sébastien Porteu, Nicolas managing director, said, “The idea was to combine an electronically-steered vehicle with a mechanically-steered one in a loose coupling mode. This is unusual but it functioned perfectly with vehicles from Nicolas following a careful planning process. Thereby, the two PowerPacks used were configured to run in a master and, or, slave mode. Once again, this is a good example of the technical innovative strength that lies behind our vehicles - they offer solutions instead of problems.”

The bogie units of the Nicolas MHD G2 are available with either mechanical or electronic multi-directional steering. The trailers are specially designed to carry extremely concentrated loads, the manufacturer said. For road transport assignments, the MHD G2 can be used as a trailer or semi-trailer combination as well as being coupled side-by-side as a 3 or 4-file combination, a spokesperson from TII Group, of which Nicolas is a part, added.