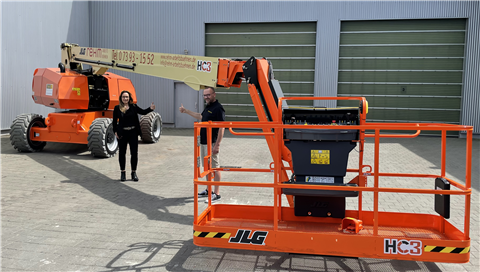 German rental company Rehm Arbeitsbühnen has taken delivery of one of the first 860SJ HC3 boom lifts to be produced by JLG Industries.

The company, which is based south of Stuttgard in Munderkingen and provdes a range of access equipment to customers across the region, added the 28.2m model in order to fill a working height gap in its current product offering.

Uwe Rehm, managing director at Rehm Arbeitsbühnen, said, “We were always looking for another machine that would close the gap between our existing telescopic platforms up to 26.3m working height and those with 38.5m working height.

“A machine that also has something special and is made for heavy loads at great heights. That’s exactly what we found in the new JLG 860SJ HC3.”

JLG said, “This allowsmore flexibility and significant time savings: with its high load capacity in the entire working area, up to three people including tools can be transported in one operation.”

Rehm, which already stocks a range electric, hybrid and diesel platform models from JLG, said it chose the 860SJ HC3 specifically for its higher payload capacity.

“We have had JLG machines in our rental programme since 1999. The decisive factor for choosing the new HC3 type was the increased payload of up to 450 kg. This is a real asset for the customers and for us.”

The equipment rental company’s new 860SJ HC3 platform will be offered to customers alongside its other JLG machines, which include the SL 153-22 DSP scissor lift model, the Toucan 10 E-L and 12E+ vertical mast lifts and the 460SJ, 1200 SJP and 1350 SJP telescopic lifts.