The Fennel is set to be an iconic skyscraper in the heart of Kuala Lumpur, Malaysia.

At 150m high, the structure consists of four blocks of 38 floors each, with a total of 459 apartments. The four blocks were built in pairs and have a distinctive architectural design in the form of a wave like-shape with sharp angles. Each pair of the towers is connected by a 50m long swimming pool. The development is surrounded parks and a variety of landscapes.

The project started in the summer of 2013, with completion in the fourth quarter of 2017. YTL Land & Development, a subsidiary of YTL Corporation, developed the project. Scan-Rent provided the Scanclimber mast climbing work platforms with sliding decks for facade work on the project.

The project required 36 Scanclimber SC4000 mast climbers with Counterweight Balanced Extensions (CBE). The CBEs were customised to include two separate long sliding decks on both sides of the mast. In addition, both the sliding decks can move independently. The sliding decks were balanced with a special counter weight system.

The CBEs were 2.8m x 4m and can move horizontally to lengths varying from 0.4m to 4m. These extensions were mainly used for cladding works on the building.

One of the major challenges of this project was the unusual zigzag-shaped façade, which made it difficult to access with a traditional mast climbing work platform. The facade incrementally protrudes 0.4m outwards every floor for seven floors and then 0.4m inwards every floor for the subsequent seven floors. For this purpose Scanclimber’s design team came up with the customised sliding decks.

Another issue came with the payload capacity. With two decks, it decreased to a capacity, in this case of 320kg.

The limited space around the towers meant the mast climber installation was also a challenge. The complex design of the buildings required the machines to be installed on a podium above the fifth floor of the towers. The podium was assembled on the top of a specially-produced I-Beams built according to the SC4000 jack load calculations.

The installation of the machines was also time-consuming process since the tower cranes were only available during the night. 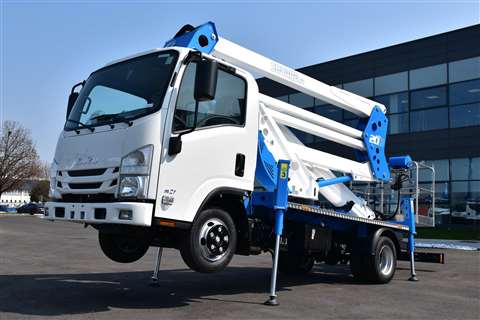