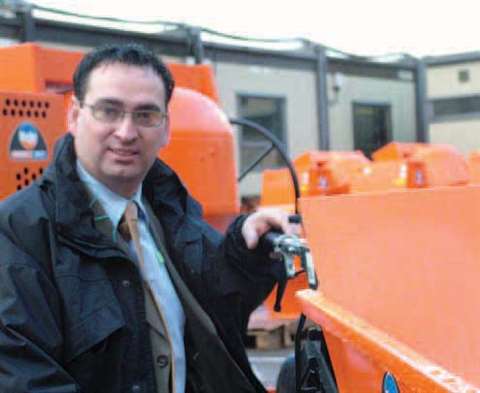 It is easy for a company to say it has a focus, less easy to decide what it actually is and stick to it. For Ray Neilson, managing director of Belle Group, focus was all-important because it represented a break from the past.

“We were all things to all people”, he says of Belle before the new strategy took shape, “We'd say yes to everybody, and then let people down.” It's an honest admission, but one made safely in the knowledge of a remarkably successful past three years, a period in which turnover has doubled and the company's fortunes well and truly turned around.

The change is due in large part to a clear and easily communicated strategy. “Our vision is to be world number one for light construction equipment”, he says. This means, specifically, equipment weighing under 1 tonne and largely walk-behind, although Belle doesn't rule-out the possibility of small, ride-on machines.

The company has already taken some brave decisions in working through this strategy, exiting both the skid steer business and power generators, a decision that saw turnover fall from £30 million to £20 million (€46-31 million) in 2002. (The designs for the skid steers are still for sale, except in Iran, where a company is producing them for the domestic market.)

“We had too many products and too many different customers”, says Mr Neilson, “The acquisitions [Errut and Panther] were good, but not integrated or leveraged.” At one point, for example, customers were contacting three different places to order parts: manufacturing in now focused on the main site at Sheen in the UK's picturesque Peak District, with a dedicated parts and service support facility in nearby Leek. The company also has a mixer manufacturing plant in Poland.

The narrower focus on products has gone hand in hand with a narrowing in on key customers, which are now rental companies and contractors – professional users. Seventy percent of all products end up in rental fleets, says Mr Neilson; “That's where we are focused – it determines how we design and test machines.”

A perfect example of this is the company's new BMD MiniDumper. Although bearing a close resemblance – particularly in the drive system – to the UK's Muck Truck product, Belle's version is much more robust and designed for continuous, heavy rental use. Serious, long-term testing of all equipment is one of the hallmark's of the company's product development.

Belle's roots are firmly in the UK and its massive plant and tool hire market. This possibly led to a rather parochial view of the world, reflected in the fact that 90% of sales in 2002 were domestic. In 2006, by contrast, around 40-45% of its £41 million (€63 million) sales were exported, mainly to Europe, which now represents Belle's wider “home market”. Nobody who visits Belle's headquarters, or who calls the Leek service facility, would today use the word “parochial”, with staff skilled in all the major (and some minor) European languages.

Belle retains a major interest in the North American market, but Ray Neilson says the policy there is not to be too aggressive; “controlled steady growth”, is how he describes it. He says US sales could reach $4 million (€3 million) next year. The company has a sales subsidiary, but distribution logistics are handled by EDC, the US Honda engine dealer.

A prime mover behind the export growth has been Kent Gorsun, the ex-Dynapac salesman who has led Belle's export efforts for over five years. In France, for example, where Mr Gorsun is based, Belle now has over 250 accounts, compared to just three or four a few years ago. He says Belle is targeting markets where rental is already established or where it is growing, like Eastern Europe.

It is also aiming to upgrade its dealers; “We want full line dealers”, says Mr Neilson, “virtually none five years ago wanted the full line. We say we want 30% market share. They want to be exclusive – if they can get to 30%, then OK.”

The sales team has expanded from around five staff to the current 30 area sales managers, and Belle has also created sales subsidiaries, the most recent being in Ukraine in November. Its operation in Russia alone now has five sales and service staff.

Belle is anticipating further growth of around 20% this year, with much of that coming from increased sales of its wet concreting and compaction equipment, which together represent between 40% and 60% of all sales; “These products can be massive for us”, he says. Also important will be leveraging its existing customer base; “The most cost effective way to grow is to sell more product groups to the same customers”, says Mr Neilson.

If the mini dumper is the big addition to the product line, Belle is also developing the other ranges. For example, there is the possibility of heavy plate compactors for the Russian and Eastern European market, as well as a sub-50 kg professional forward plate. The recently introduced RT65 rammer, with a compact design well suited to European markets, may well be used as a template for other, lighter rammers.

A new bench saw will also be available in the first quarter of 2007. The Ambassador saw, capable of cutting up to 195 mm deep, will be available initially in petrol version, with electric to follow. Belle is also looking at lighter weight bench saw capable of taking a 350/450 mm blade.

It will take more than new products, however, to drive Belle towards its goal of becoming number one in light equipment worldwide. Ray Neilson says the target is a 30% share of the £1 billion global market, of which around half is in Europe.

That would mean £300 million (€460 million) in annual sales, achieved by a mix of organic growth and acquisitions. “It's a big vision. It's not easy”, he acknowledges. One thing is clear, Belle can't afford to lose any of its hard-won focus.