Traffic moves along despite bridge demolition 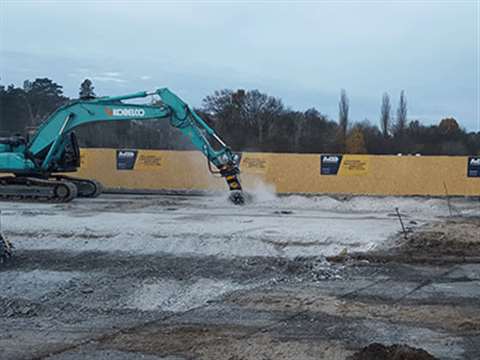 German company ERA has used the range of MB Crusher drum cutters to complete demolition works on an old bridge on the A115 motorway near Berlin.

One of the aims of the contractor was during demolition was to keep traffic moving – the old bridge had already been superseded by a newer version.

The large drum cutters were used at the beginning for the primary demolition of the layers which made up the bridge.

After this, to avoid too much stress on the structure, it was decided to use the MB Crusher drum cutters, the only cutters in the world fitted with the patented direct drive twin motor system which allows the differentiated distribution of power to the two cutting heads.

When operating materials of varying hardness, the MB drum cutters adapt, applying power in proportion to the hardness of the material in question. This results in improved stability and a reduction in stress on the excavator arm.

The work was carried out in two steps.

The first led to the removal of a 36 cm (14 in) thick layer of cement, later used for filling operations as it was recycled without being contaminated with other materials.

The second step was for the demolition of a further layer of tar, destined for dumping, as it was contaminated material.

And despite eight days of intense work, it was not necessary to interrupt traffic.