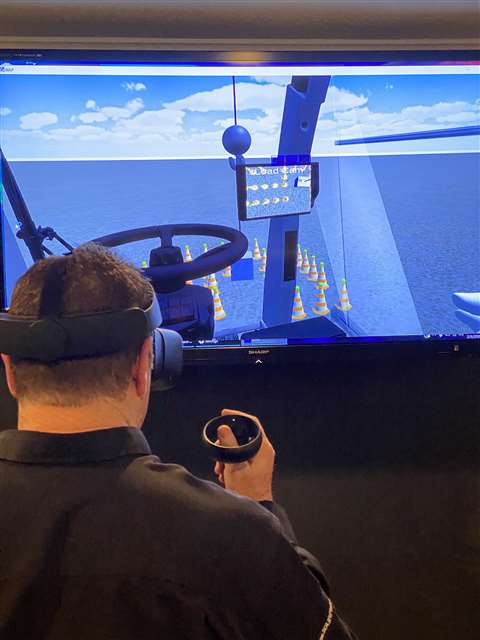 An operator’s perspective of the new 3D Lift Vision

3D Lift Vision is claimed as the industry’s first VR Simulator for lift planning by its developer, A1A Software in the USA.

It allows users to execute a three dimensional lift plan in VR mode using a virtual reality headset and controls. Tawnia Weiss, A1A Software president, explained, “Each simulation is as unique as the lift plan that it is based on. There is no better way to visualise the outcome of a lift than to allow the crane operator and other team members to simulate it in a virtual environment.”

An entire crane and rigging crew can see and practice a lift in the safety of a virtual environment. The crane operator, riggers, signal person, and tagline holders can all engage at the same time, Weiss said, “3D Lift Vision extends the ability of 3D Lift Plan to be used as a communication and risk mitigation tool.”

Prior to a lift customers can be shown where cranes and people will be placed and how the lift can be made according to the proposed lift plan. The same applies for risk mitigation where the whole crane and rigging crew can practice the lift before arriving on site. People involved can be in different locations and still simultaneously engage in the same simulation. It also improves communication with lift directors, safety directors, and other contractors or trades, Weiss said.

The simulations are based on plans produced using A1A Software’s 3D Lift Plan. Employers can then evaluate and qualify operators for the crane and application at hand. Operators can also use it generally for practice.

The new product is a licence added to 3D Lift Plan subscriptions and each one includes a VR headset. The hardware is compact, portable, and wireless, making it easy to deploy anywhere, Weiss said. It will be launched and demonstrated at the ConExpo show in Las Vegas, USA, from 10 to 14 March 2020.