A new direction for wind power 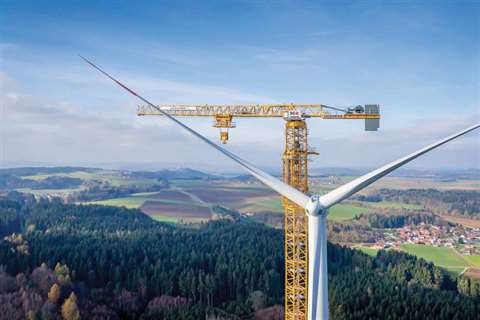 Manufacturers and end users are looking towards new solutions and upgraded equipment to keep up with the demands of wind turbine installations.

The attitude towards renewable energy has shifted in recent years and wind energy in particular is increasingly being viewed as a necessity. As Peter Hofmann, Liebherr-Werk Biberach head of communications, tower cranes, points out, political leaders are starting to invest more in wind farm technology and developers are coming up with new solutions to get more energy out of low winds.

In addition to these influences, wind farm site conditions vary all over the world and issues such as space, environmental rules and local authority approvals all have a direct impact on the way wind farms are developed. To overcome potential problems with turbine transport and erection, equipment manufacturers have developed a range of more versatile equipment solutions, providing end users and contractors a wide choice of how to transport, lift and assemble turbines.

For installation, contractors and end users tend to favour large telescopic boom cranes to assemble the concrete rings of the towers to a certain height. Larger lattice boom cranes tend to be used to assemble the higher tower sections, as well as the turbine and blades, Wolfgang Beringer, sales promotion Liebherr-Werk Ehingen says.

The increasing size of wind turbines and their towers, however, has driven manufacturers to conjure up new solutions. The tower crane division at Liebherr, for example, designed and launched the 1000 EC-B 125 Litronic tower crane with the new generation of wind turbines in mind. The model has a capacity of 125 tonnes to handle the latest size of generators. It is transportable in sections that fit standard trailers.

“Our concept using a trolley jib crane and a crane tower tied in to the wind turbine tower is successful,” Robert Strohmaier, Liebherr Tower Crane Solutions department added. “Using a tower crane for turbine assembly means that risks of half rigged crawler or truck cranes falling over are non-existent. In addition, the speed of transport and handling between sites compensates the higher erection time of the tower crane.”

Liebherr also has a new solution for erecting its 600 tonne capacity LR 1600/2 crawler cranes with long wind power boom system at wind farms. Instead of using a large amount of counterweight when erecting the boom system, a LTR 1220 telescopic crawler crane can be used as the counterweight instead. This helps reduce the amount of extra counterweight that would otherwise need to be transported. It assumes, of course, the availability of this crane on site.

The new concept includes attaching the LTR 1220 and ballast plate to the derrick jib of the LR 1600/2 using a cross beam with strap loops. Using this concept would mean that only 70 tonnes of counterweight would be required for use as suspended ballast, instead of the usual 350 tonnes, during the erection and lowering of the boom system.

“The crane and ballast plate are attached to the derrick jib using a cross beam with strap loops,” the manufacturer explains. “After the erection process the telescopic crawler crane is detached again. The remaining 70 tonnes of derrick ballast can now be used to hoist the load.”

The new erection concept from Liebherr can be used for all long boom systems up to a length of 156 m with a 12 m fixed jib. This applies both to the new SL10 and SL13 systems and also to the existing SL4 system.

Transport equipment
The latest equipment from specialized trailer manufacturer Goldhofer is the Superlift fourfold extendible flatbed semi trailer. The trailer is used for transporting long rotor blades. It has a deck extension of 57.8 m and is capable of carrying blades that measure more than 65 m. It can be used with 5-axle or 4-axle tractors and, in the latter case, with or without a single-axle dolly. Also from Goldhofer for transporting rotor blades is the FTV 300. It can be used on mountain roads with tight bends and over inaccessible terrain and can tilt the blade hub up to an angle of 60 degrees so that it is transported in a semi-upright position, the manufacturer said. The FTV 300 is mounted either on a modular trailer or on a Goldhofer self-propelled modular transporter.

For turbine erection, Australian crane service company Boom Logistics uses a LR 1750 crawler crane. Nick Dewar, Boom Logistics national business development manager, says, “The LR 1750 has the ability to lift 100 tonnes at more than 100 m high. It has greater lifting capacities on SL8HS boom configuration and has the ability to crawl between turbines. It also has a wind speed tolerance for erection of 12.8 m per second, as opposed to other crane models that have a limit of 7 m per second for nacelle erection. It also has the ability to run two winches for fast delivery of bolts, lifts and smaller components. The LR 1750 has 2 m wide tracks resulting in 38 % reduction in ground bearing pressure. It has greater ground inclination and has the ability to crawl up to 10 degrees.”

Boom Logistics installed 55 Senvion wind turbines at the Bald Hills Wind Farm (BHWF) in Victoria, Australia. On site was a Liebherr LTM 1500 all terrain and a LR 1750 crawler crane to erect the turbines. The turbines were made up of a 54 tonne base, a 42 tonne middle section, a 36 tonne top tower section and a 62 tonne nacelle. Each turbine had a hub height of 80 metres. The rotor blades weighed 8 tonnes each and had a diameter of 92 m. Two turbines were erected per week. The wind farm will generate enough renewable energy to power the equivalent of more than 62,000 average homes, Dewar said.