A region under construction 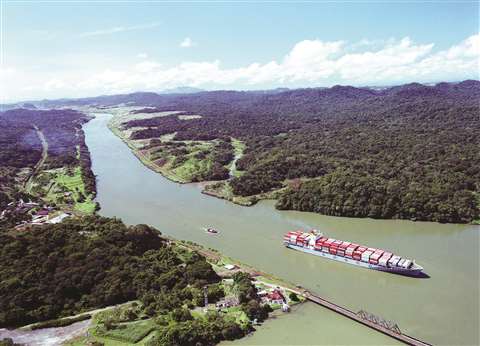 According to a recent Global Economic Outlook report from the International Monetary Fund (IMF), Central American economies grew an average 3.8% in 2016, and are set to grow a further 3.9% this year, followed by 4.1% growth in 2018.

The IMF sees Panama heading the expansion, with growth of 5.8% in 2017, followed by 6.1% growth in the next fiscal year.

Nicaragua and Costa Rica appear in second and third place, respectively, followed by Guatemala, Honduras and El Salvador, on the economic growth chart for this year and next.

The 15 largest projects currently underway in Central America command investment totalling over $74 billion, with the port sector accounting for more than 73% of that amount.

By far the largest project in development is the Nicaraguan Canal, a project planned to link the Caribbean Sea – and therefore the Atlantic Ocean – with the Pacific Ocean. Controversially, the canal will utilise both the San Juan River and Lake Nicaragua – Central America’s key freshwater reservoir. The predicted cost of the canal is $50 billion.

Now owned by China’s HKND, the Nicaraguan Canal project is based on a 276 km-long, 230-280 m-wide wet track, with a deepwater port at either end. There will also be a pipeline, a dry canal, an airport, two artificial lakes, two locks, a free trade zone and tourist complexes.

Planners estimate the initiative could generate as many as 40,000 jobs and double Nicaragua’s per capita GDP.

Of course, the project has generated as much controversy as excitement, encountering strong opposition in many quarters.

Yet, at the end of March this year, the Nicaraguan Supreme Court rejected the last appeal against the canal and now the path is clear for construction to begin.

The president of Nicaragua, Daniel Ortega, with Wang Jing, president of HKND, signing the Canal contract in 2013

Another huge undertaking – and another inter-oceanic link – is the new railroad project in Honduras. Again, two deepwater ports will complete the link, this time between the Atlantic and the Pacific, with ten railway lines, totalling around 600 km between them.

The $10 billion project will allow for the handling of around 24,000 containers annually. By the summer of 2016, five Honduran companies had shown interest in taking on the construction, and interest was also being shown by companies in Asia, Italy and the US. Yet, the Commission for the Promotion of Public Private Partnership (Coalianza) said the the project “could attract thousands of investors” who might wish to take advantage of the country’s geographical position, with its “privileged place in the world.”

With the Panama Canal’s expansion complete, there is no shortage of firms bidding to build the waterways’ fourth bridge

Clearly, the inter-oceanic projects mentioned owe their credibility to the Panama Canal, and, turning to Panama, the country is completely renovating its public transport system. To this end, things are moving rapidly in Panama, following the inauguration of Line 1, the first Central American metro in April 2014.

Currently, the country is building Line 2, set to run between San Miguelito and New Tocumen. The system will include 16 stations and have a capacity of 16,000 passengers per hour, per direction.

Construction on the railway is being carried out by, Consortium Line 2, made up of Spain’s FCC Construcciones and Constructora Norberto Odebrecht. The participation of the latter scandal-hit Brazilian firm caused some financial setbacks to the work, as Citibank withdrew its support for the project.

Initially, the plan was to finalise work on Line 2 during the first quarter of 2019. However, a possible visit of Pope Francisco in January of that year could see the schedule moved forward.

A further $2.6 billion will also be required to begin operations on Line 3 of the Metro, with construction set to begin in 2022. This project, planned as a monorail, will have 14 stations and could carry some 20,000 passengers per hour.

One large-scale rail project that has taken a long time to get off the ground is the construction of an ambitious electric rail system in Costa Rica.

After years of failed attempts, the country’s legislative assembly passed a bill last year, allowing its publicly-owned rail company, INCOFER, to incur debt equivalent to up to 40% of its assets, to build the all-electric system.

With an estimated cost of $1.6 billion, the project is likely to move forward as a public-private partnership, initially comprising a line running from Cartago in the east to Alajuela in the west.

The bill, however, also authorises INCOFER to move forward with plans for a cross-country electric train system, potentially from the north Pacific coast to the Caribbean port of Moín.

The primary purposes of the project are to begin to reduce the serious traffic problems in the country and bring down travel times. It is also hoped the system will ameliorate Costa Rica’s greenhouse gas emissions, 40% of which come from automobiles.

Impression of the container terminal at Moín, Costa Rica, complete with expanded quay and post-Panamax cranes

As things stand, there are six international consortiums bidding to build the fourth bridge over the Panama Canal.

The bridge, valued at around $1 billion, will have six lanes for vehicles (three in each direction) each being 3.65 m wide. There will also be two lateral sidewalks of 1.7 m for the maintenance of the bridge. Additionally, there will be space for shoulders, placement of safety barriers and structural elements of the bridge. Space will also be available for the double track of Line 3 of the Metro, bringing the total width of the bridge to 51 m.

Another project intrinsically linked to the Panama Canal, and one which is struggling to get past the bidding process, is the port in Corozal Oeste.

The deadline set for receipt of bidding documents expired in March, but the Panama Canal Authority (ACP) announced that no proposals forthcoming from the prequalified construction firms.

ACP said it was continuing “with its constitutional responsibility to seek an operation more and more profitable, through a strategy of commercial development that generates conditions for the benefit of the country.”

When completed, this $1,35 billion Pacific port will take advantage of its location to meet the new vessels that can now make use of the Canal. Set to be built in two phases, the port will ultimately handle a capacity of 5.2 million TEU (twenty-foot equivalent) containers. 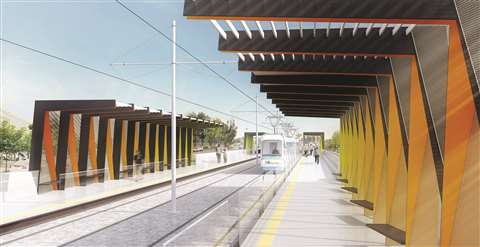 An artist’s rendering of the MetroRiel train system, set to carry 250,000 passengers a day through Guatemala City

In Moín, in the province of Limón, Costa Rica, there are currently two major port initiatives. One, currently under construction by APM Terminals, is a deepwater container terminal, set to begin operations at the beginning of next year. The complex will have an initial capacity of 1.4 million TEUs per year. By 2048, when the APM concession ends, the annual movement of cargo is expected to have reached around 2.5 million TEUs.

As part of the terminal’s construction, APM dredged the access channel and turning-basin, deepening it to 16 m. The firm also constructed a new 1.5 km breakwater with a 40 hectare container yard, as well as 600 me of quay and 2 berths, equipped with 6 post-Panamax cranes.

When the final phase of the project is completed, the facility will cover an area of 80 hectares, with 1500 m of quay, 5 berths and an 18 m-deep access channel. According to AMP, it will serve as a shipping hub for the Caribbean and Central America.

Also in Moín is the Mega Terminal of the Atlantic (MTA), a project that has been in the pipeline for several years. Proposed by America’s Gateway Development Corporation (Amega), it now appears to be gaining momentum and is predicted to begin operations in 2022.

While the construction of two large ports in the same geographic location has been questioned, it is considered that the initiatives will not compete but will in fact be complementary, since the MTA will handle international cargo from large ships, which is to be distributed throughout the region, while APM’s container terminal in Moín will focus primarily on serving the local import and export of domestic products.

While Costa Rica supports the development of two huge ports, Honduras has maritime ambitions of its own, namely the modernisation and extended operation of the Punta Castilla port, on its central northern Caribbean coast.

The port’s operation originally began in 1984, but new plans will see the construction of a cruise ship and cabotage pier and a modern port terminal.

As part of a public-private partnership operation, the port will also see significant dredging take place, enabling it to receive larger ships, while the installation of logistical and technical equipment necessary for expanded operations will take place.

The total cost of the project is estimated to be around $443 million.

In Guatemala, the feasibility of constructing a Metro system is currently being studied. If the project gets the green light, the system will run 20.5 km, from the northern to the southern end of the capital, Guatemala City, in just 41 minutes, including 20 station stops.

The project was designed by Spanish firm IDOM Ingenieria y Consultoria, and, due to the high cost of the initiative – anticipated to rise to around $770 (including road connections and two intermodal bridges) – it is proposed as a public-private partnership model.

If the planned steps are met, the MetroRiel system could be up and running by 2021, and have the capacity to carry up to 250,000 passengers a day.

At present, the international airport of El Salvador has the capacity to serve some 1.6 million passengers per year. Last year, however, more than 2.9 million passengers passed through the facility, with growth of around 10% per annum forecast moving forward.

With this in mind, the government has accepted the need for expansion, and investment of around $493 million is being sought to undertake the four phases of terminal construction, along with other smaller projects.

This year, several tenders related to the expansion masterplan – to be concluded by 2032 – will be launched.

As well as the expansion of the terminal, the initiative includes new waiting rooms, boarding bridges and parking lots.

Following the initial expansion phase, the airport’s capacity will stand at 3.6 million, although it will ultimately be able to welcome around 6.6 million passengers.

In the municipality of Acajutla, El Salvador, Energía del Pacífico plans to build a 378 MW installed capacity generating plant, an LNG storage and regasification terminal, an LNG subsea pipeline (already re-gasified), and a transmission line of 45 km, to inject the energy to the national transmission system in the substation of Ahuachapán.

The project, which calls for investment of some $800 million, is currently concluding its development stage, with some $20 million already accounted for, and, with construction underway, is set to be operational by 2020.

Costa Norte, in Panama, is another major LNG undertaking. The $900 million project, which includes the construction of a combined cycle plant with 380 MW generation capacity and a 180,000 m3 LNG terminal, was tendered last year and Gas Natural Atlántico and Costa Norte LNG Terminal respectively were awarded these works. The construction of the complex, as a whole, is being carried out by the South Korean company Posco E & C, under a turnkey contract.

Costa Rica is investing heavily in geothermal energy and recently agreed a $554 million loan with the Japanese Government’s International Cooperation Agency (JICA) for the development of three plants: Las Pailas II, Borinquen I and Borinquen II.

The investment in Las Pailas II alone, which is currently under construction, amounts to $320 million. This facility will have a generating capacity of 55 MW and is set to begin its commercial operations in 2019, becoming the seventh geothermal plant in Costa Rica.

One of the main features of the project is that its cooling tower will be made from fibreglass, as opposed to the usual concrete or wood, thus reducing project investment, lowering operating costs and benefiting the environment.

The Costa Rican Electricity Institute (ICE) expects to start construction of Borinquen I (which could begin its operations in 2023) in 2018. In 2020, it is also expected to begin work on the Borinquen II plant. Both projects, like Pailas II, will have an installed capacity of 55 MW.