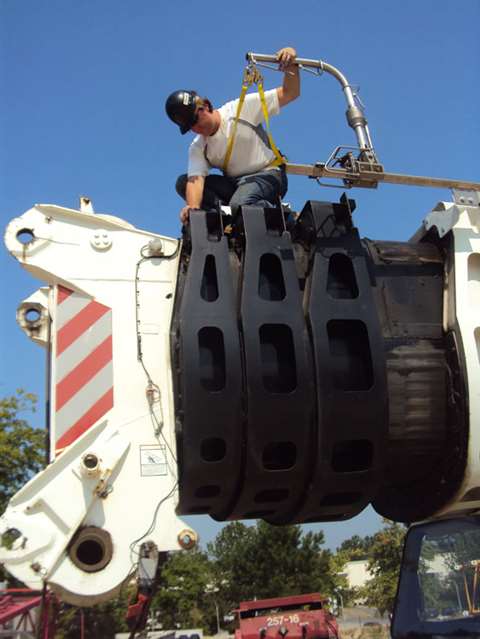 It is no longer acceptable for a company to allow its employees to work at height without some form of protection, either to reduce the risk of a fall or to reduce the impact of a fall

It is no longer acceptable for a company to allow its employees to work at height without some form of protection, either to reduce the risk of a fall or to reduce the impact of one. In the last ten years more and more crane owners and manufacturers have come to accept this and have taken action.

Many countries have specific legislation in force regarding working at height, although the precise terms in which it is couched – including what constitutes a dangerous height – vary from country to country. Even where there is no such legislation, any responsible company aspiring to reach international operational standards nowadays seeks to ensure that good safety practices are embedded throughout the supply chain.

A result of this is that owners of mobile cranes have come to realise that it is no longer possible for them to allow riggers or maintenance crew to clamber on top of crane booms without some form of protection. Most crane manufacturers have also recognised this and responded by adding fall protection systems onto their latest models.

The different approaches being taken by the original equipment manufacturers (OEMs) to height safety are a product differentiator. Of course, designing out the need to work at height remains the preferred option but that has not always been possible – and is clearly impossible on cranes that are already in the field. Early initiatives from the OEMs included supplying fixed rails around the upperworks of cranes and providing clip-on points for tying off a safety harness. The shortcoming of this approach is that it limits movement and is of no benefit when walking along the boom. More recently systems have evolved that allow the rigger to move around while keeping their harness safely fixed. Some offer fall arrest, to catch the faller before he or she hits the ground; others offer fall restraint, offering all the features of an arrest system but actually also preventing a fall from occurring in the first place.

Manufacturer of height safety products Standfast, for example, launched the travel restraint access module (TRAM) system, which has now been fitted to approximately 500 mobile cranes worldwide over the last five years and 10,000 pieces of equipment in total over the past decade, including mining machinery, tanker trucks and gantry cranes.

The system has a handle at waist level onto which the user ties his or her harness. Squeezing a trigger on the handle allows it to be pushed along a rail that is fixed at foot level. The system enables the operator to tie off at waist level, rather than overhead or at foot level. It also has a movable handrail, which provides support and allows the operator to move about with greater ease. In addition, the handrail is air-sprung to help the operator climb up and over to get onto the summit.

Crane manufacturers that now offer the TRAM system on their cranes incorporate the TRAM rail in their boom designs. Both the rail and the handle are made from stainless steel; they weigh so little as to have negligible impact on lifting charts but are strong enough to restrain a 15 kN force in compliance with all applicable standards. The OEMs have been slightly more cautious, however, in sanctioning retrofitting.

Early retrofit methods for TRAM involved welding small lugs onto the boom and bolting the rail onto this. But while this was fine for tanker trucks, some crane manufacturers expressed concern about such work being carried out on their booms – as they do in relation to any third party boom repair work conducted outside of their control.

In response, Standfast came up with a new method that involved strapping TRAM’s guide rail onto the boom. It proved effective and complied with all criteria laid down by the OEMs, but Standfast acknowledged that it could conflict with the mounting of certain accessories.

After extensive trials and tests a new fixing method that uses a special elastic two-part adhesive that connects the rail anchors to the boom was established. In developing this solution it had to come up with a way of providing large enough connection areas between the TRAM rail and the boom, and of maintaining sufficient inherent flexibility so that an extended boom, bending under load, would not snap the fixings or impede boom performance.

Jeff Bedwell, Standfast president, explains, “With our old way of fixing the TRAM rail to the boom, we had to tailor each system to each crane make and model. We needed very accurately dimensioned profiles to be made and powder coated. This would take a few weeks and kept the crane out of service. Using adhesive mounts, we have streamlined the fitting process and we can move much faster. If we are told a crane is coming back to the depot for a service next week, we can now fit TRAM within half a day.

“Welding remains a perfectly feasible option for us, but the crane manufacturers have such strict guidelines on procedures that it is easier for them to design it into the boom manufacturing process.”

A new method
When the bonding solution first emerged as an option, some crane associations and manufacturers sought reassurance not only that the glue was strong enough for the job but also that it did not cause any damage to the high grade steel from which booms are made. Was the adhesive flexible enough to withstand the flexing of an extended boom under load? Could it tolerate the vibrations of a crane travelling at speed down the highway or bouncing across a construction site?

To all these questions Standfast and its adhesive supplier provided answers. Standfast uses a special structural adhesive manufactured by Henkel called Teroson Terostat ME 9399. Branded as Loctite 5590 in North America, it is a silane-modified polymer that is formulated to withstand high temperatures, provide chemical resistance, survive aggressive pre-treating and high performance paint processes and provide long-term corrosion resistance. It has good UV and weathering resistance. It is described as a highly viscous, sag-resistant, two-component adhesive based on silane-modified polymers, which cures independently of the atmospheric moisture to an elastic product. It is free from solvents, isocyanates and silicones. It also has the adhesive pliability to absorb vibrations associated with road and construction site travel as well as boom flexing during lifting operations.

The adhesive has a tensile strength (DIN 53504) of 3.0 MPa and elongation at break (DIN 53504) of 150 %. Other industrial applications for the adhesive include the manufacture of aircraft and railroad vehicles and in shipbuilding.

Andy Scott, Henkel applications engineer, says, “Yes it's true that there are adhesives which may attack and corrode metals. But in this case we are talking about a silane-modified polymer, which does not contain any solvents or harsh chemicals. In fact, it has corrosion protection ingredients incorporated.”

Highlighting risks
However, even with the right bonding agent, retrofitting a fall restraint or fall arrest system onto a crane boom still requires proper engineering input from an appropriately qualified person since, as the International Crane Stakeholders Assembly (ICSA) highlights in a draft position paper on this topic, there is a risk of affecting the stress distribution in the crane structure if it is done incorrectly.

Not unlike welding, it still requires strict procedures that must be followed to ensure proper curing, including careful surface preparation. The actual installation process involves identifying where the mounts need to be placed, carefully marking the exact mount profile, removing the paint within that profile to expose the steel and preparing both surfaces according to the adhesive manufacturer’s recommendations. The Terostat MS 9399 is then applied through a dispensing gun designed specifically for this adhesive, and the brackets are pushed into place and secured with straps on top of spacers sized to maintain the adhesive layer thickness recommended by the adhesive manufacturer. The adhesive cures to handling strength in less than two hours in normal ambient conditions, at which point the pre-measured rail and TRAM system is fastened to the mounts with Standfast’s standard fastening kits.

Klaus Meissner, Terex Cranes director of product strategy, says, “The general concern is that if you have a highly loaded structure any modification will disturb the stress distribution. If it is done in the proper way, it will not have any impact. Manufacturers have to be a little bit cautious because we do not want to be held responsible.”

Tried and tested
Last year, one of the world’s biggest crane owners retrofitted TRAM systems to nine Grove and Liebherr cranes in its Canadian fleet, ranging from the 130 to 250 tonne classes. This company is satisfied that the safety solutions offered by the OEMs on their latest cranes are perfectly good enough for its European markets, where tying onto a rail at foot level appears to be generally acceptable. In Canada, however, the stricter safety regulations made TRAM its preferred option. The Canadian Standards Association (CSA) specifically prohibits tying off at below harness level. Workers must be given total fall restraint, not just a drop-and-catch fall arrest system.

The debate over the relative merits of fall arrest versus fall restraint will doubtless continue. But those who do prefer total restraint now have an option that has been proven in the field by some of the world’s leading construction and crane operating companies, and that can be retrofitted quickly and simply with full engineering approvals, in full accordance with crane manufacturers’ recommendations.