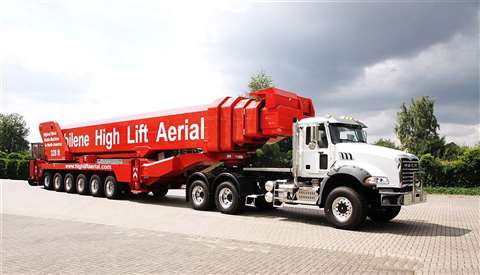 Texas-based Abilene High Lift Aerial has received the Ruthmann TTS 1000 platform it ordered back in the beginning of 2010. The second-hand Steiger model was purchased from German rental company Gerken and features a 328-foot working height, which is said to be the highest in North America.

The 8-year-old machine is believed to be one of the first Ruthmann machines ever sold in North America. The order follows the acquisition last year by fellow Abilene company, TGM Wind Services, of two new 295-foot Bronto Skylift S90HLA units, used for wind energy applications.

Abilene will provide rental customers with International Powered Access Federation (IPAF) certified trained by Anton Ruthmann Gmbh & Co. of Germany. Ruthmann is the manufacturer of the Steiger TTS 1000 and an IPAF training center.

The TTS 1000 is mounted on a six-axle trailer powered by a Mack Granite Series truck using a 505 hp diesel engine. The unique trailer/truck configuration supplied to Abilene High Lift by TransEdge Truck Centers.

The original machine ordered by Gerken used a Mercedes truck, but Abilene has chose to replace that with the Mack unit. Ruthmann, although not directly involved in the sale of the machine, will be involved in checking the engineering of the new Mack/lift combination.

The unit will be used for accessing wind turbine nacelles, building exteriors and other tall structures. It can set up and ready to work by one person in 15 to 20 minutes. It features a pressurized water outlet and 110/220-volt outlets in the platform.