The access industry lost one of its pioneers on 19 June with the passing of Art Moore, aged 94. The news was announced by Snorkel, the company that he founded 60 years ago and for which he was still serving as a board member.

Moore founded Snorkel in 1959, initially to sell aerial firefighting equipment produced by Pitman Manufacturing Co, a business he had founded with Ray Pitman. It went on to develop 17 models in less than a decade, and in the process building the foundation for today’s Snorkel. 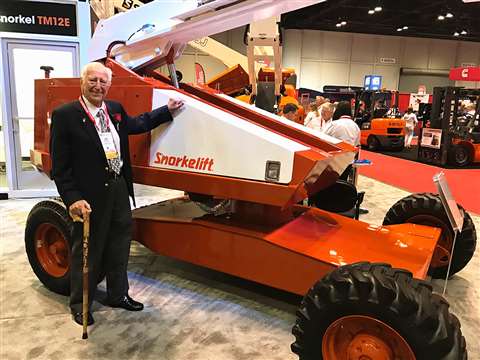 Art Moore with the first built Snorkel TB-42 at the ARA’s Rental Show in 2017.

He was well-known for the Snorkel TB-42 telescopic boom, which became a standard in the industry for many years, as well as the introduction of one of the first ‘big booms’, a 126 ft (38 m) unit.

Snorkel said; “We have been incredibly fortunate to have been graced with Art’s innovative vision, insightful wisdom, whimsical humor and cheerful personality for 94 years.”

“Known for his drive and determination, Art’s career has set an extraordinary example and left a lasting impact on the global work at height industry. His imaginative designs and pursuit for quality helped to shape the industry in its infancy and set standards still followed to present day.”

Moore’s honours included the Lifetime Achievement Award at the 2016 International Awards for Powered Access (IAPA), and induction into the American Rental Association’s Hall of Fame in 2017.

Moore’s business credo was to build machines that were reliable and simple to operate, and is well summarized by this quote; “Our history has changed quite a bit over the years, but one thing is still the same. It has always been the Snorkel philosophy to listen to our customers and to ‘keep it simple.’ Our machines are built for the customer and also by the customer with designs that are reliable, robust and adaptable to industry needs.”

Following the acquisition of Snorkel by Don Ahern in 2013, Moore became a Snorkel board member. 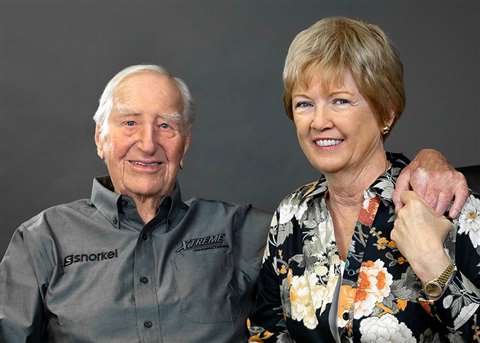 Art Moore with wife Sue during a visit to the Snorkel headquarters in Henderson, Nevada in October 2018.

Ahern said; “For many years, Art Moore was a mentor to myself and others in the early years of the access rental and dealership business, and he ultimately became a close friend. He will be a great miss to Snorkel and the wider industry, and I send my sincere condolences to Sue and family at this difficult time.”