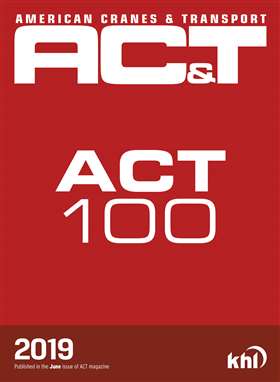 The American Cranes & Transport ACT100 Index of North America’s top crane-owning companies saw substantial growth over the past year. The top 100 companies added 182,796 tons of capacity for a total capacity of 2,618,656 tons. For the second year in a row, the ACT100 charted growth in almost every category we rank. In 2018 the ACT100 index was 2,495,860 tons and it was 2,365,977 tons in 2017. This growth can be attributed to three factors: sustained economic growth in North America, mergers/acquisitions by the top 10 companies on the list and the addition of several new,higher capacity cranes by the larger-scale companies.