There is an upbeat view of the access industry as participants in AI’s annual Confidence Survey give a thumps up for the next 12 months.

Overall, this year’s Confidence Survey of manufacturers, rental companies and end users is very positive. The survey asked companies how confident they were about equipment selling and buying, as well as rental rates and overall market growth in their areas of activity for the coming year.

The survey also asks participants on a scale of 1 to 100, how they rate the opportunities for their businesses over the next five years. The results are averaged to create the Confidence Index.

This year the Confidence Index stands at 63%, which represents a fair drop from last year’s index of 68%. As with last year, it does not directly reflect the results seen in the graphs across these pages, which represents forecasts for the next 12 months, rather than the Index’s five-year scope.

Last year, the Index suggested a higher level of confidence than the graphs overall, while, this year, it seems the opposite is true.

One way or another, a certain amount of caution is always represented in the results of the Confidence Survey and this year they have been borne out in the Index. It is also worth noting, in 2016 the Index result stood at 63.8%, just a whisker above this year’s.

When we look at growth expectations for the year in 2018, the results are unarguably positive. Nearly 60% of manufacturers, rental companies and end users combined believe there will be between 1-10% growth in their businesses, while around 29% believe there will be more than 10% growth. Those forecasting a fall in business by up to 10% or more next year drops to less than 5% in each category. 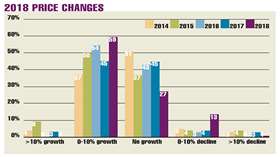 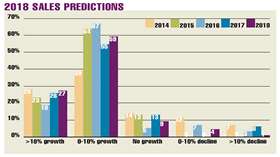 Forecast for rental rates 2018 all sectors

Breaking out the same data for rental companies only, there is an almost equal level of confidence for the coming year. And asked if they plan to buy new machines next year, around 70% of rental companies say ‘yes’, while only 14% say ‘no’.

If anything, manufacturers are even more confident about next year, with less than 3% of those taking part in the survey saying they expect to see a drop in business and just 5% forecasting that machine sales specifically will dro

Production levels also promise to be quite impressive next year to match the expected growth in sales. This is helpd by signs of growth in southern Europeean countries like Italy and Spain, while countries further north are also seeing a return to prosperity in the access sector, for example France and the UK. The latter, at least for the moment, continues its growth spurt despite the threats that Brexit poses.

In the regional growth graph, manufacturers, end users and rental companies are forecasting a good year. The only real exception to that rule is in South America, where the figures show more participants expecting declines than last year - 17% forecast a 10-20% drop in business.

On the subject of regional activity, the survey also invited those taking part to comment about the market in their areas of activity. These sentiments reflect what we are seeing across the graphs, a noteable air of confidence, significantly in the emerging markets.

A contributor from India said, “India will see significant increases in applications of aerial work platforms, but also an increase in rental rates, which will always be a challenge.”

Concerning Africa, one participant said, “The construction industry is going to see a big hike upwards during the next five years directly impacting on the need for the aerial platform business.”

Another from Africa noted, “There is a growing need for aerial lifts as the market matures and people realise the full potential of this type of equipment. It is now much better understood how very often a piece of access equipment can be safer and save time and energy, in addition to getting the job done more quickly.”

Stepping into Europe, the UK is one of the world’s biggest markets for MEWPs. It has also seen significant consolidation over recent months, as has the rest of Europe. One company summed it up this way. “I expect that the UK powered access market will continue to generate complaints about silly hire rates. I think that we will see some more consolidation and I also expect to see relatively new companies becoming distressed through their rapid growth and little attention to the debt levels that they are building up. Over the next two years the private equity-owned and publicly-owned businesses will enjoy some juicy opportunities.”

Although another UK company added, “With Brexit a very large part of next year’s agenda, we will need to keep a close eye on how this proceeds and how it affects the business.”

And, as previously discussed, there is caution in the results of this year’s survey. Concerning the whole of Europe, one participant said, we will, “Probably see static to small declines unless a crash comes.”

The world’s biggest MEWP market the US is experiencing the introduction of new ANSI standards that will affect operators in the way they use the machines. While the changes are undoubtedly positive for the development of the MEWP industry, not only in North America, but thanks to more closely aligned standards, for the rest of the world too, there are always challenges when such a major change takes hold, particularly for those who have to use the equipment. See more about this in Product news, in this issue of AI. A manufacturer from North America said, “The current round of updating standards is causing a minor ripple due to the engineering changes needed.”

Regional growth prospects for 2018 all sectors

Minor ripple is a good way to describe many of the reactions from those taking part in this study. The point being, in general markets are strong but there are always potentially choppy waters ahead.

A company based in Australia supports this view, “The aerial business in Australia is very healthy. But rental rates are under pressure as in any mature market.”

This sentiment is echoed again on a global level by another participant, “There are growth opportunities globally, consolidations within the rental market will lead to more competition in pricing which reflects on more price pressure towards manufacturers. We see increases in component prices so there is definitely pressure to increase prices towards our customers.”

Setting aside the cut and thrust of daily business, I think we can be happy with the results of this year’s survey and hopefully by next year the expectations for the next half-decade will have risen to match.