German crane rental firm AKM Autokranvermietung was commissioned by Munich City Utilities to lift a chimney liner weighing 19 tonnes into the existing chimney of a cogeneration plant in Munich, Germany.

Due to cramped conditions on the job site bog mats were placed under the crane’s outriggers in order to raise it up and gain a little more height. A customised spreader beam was used, with its load sling fixing holes matched to align with the liner segments enabling the maximum possible hook height to be achieved. Despite this, clearance was tight, with just 20 cm between the load and a railing at the top of the chimney. Due to lack of visibility a signalman was used and the liner successfully installed . 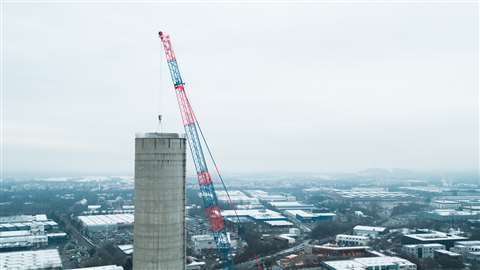