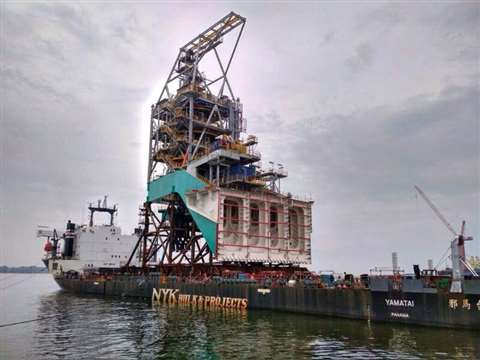 ALE was contracted for the weighing, transportation and load-out of the system as part of a project to transfer the turret to Korea, where it was subsequently installed onto a ship’s hull.

The job was particularly challenging, ALE said, as there was limited space available during the transportation. It said it managed to successfully navigate this, as well as negotiate 90-degree turns in narrow areas. 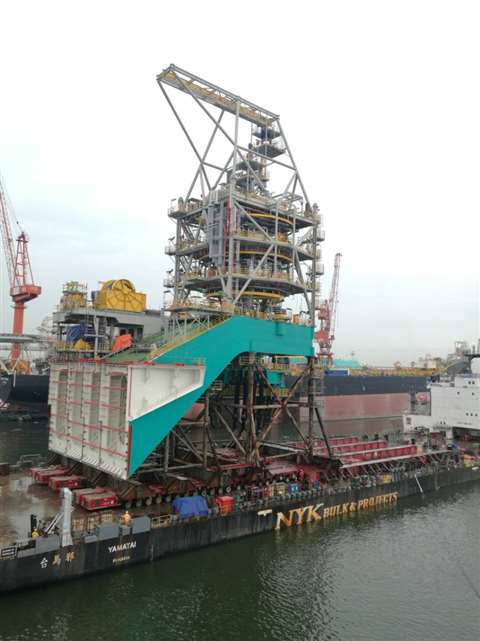 ALE weighed the turret mooring system using 176 axle lines of self propelled modular transporter (SPMT). To increase the accuracy of the readings, ALE said it installed two manometer gauges on each of the four sets of hydraulic suspension. The turret support structure, weighing 1,265 tonnes, and an SAS gantry, weighing 330 tonnes, were transported by SPMT from the fabrication workshop to the assembly area. The turret support structure, SAS gantry and turret head were assembled before being loaded-out onto a barge.

Following the load-out, the structure was transported to South Korea for the final installation onto the main hull.

Ariff Mustaffa, ALE project engineer, said, “We are delighted to have successfully completed the work on this project. Our team have worked really hard and it paid off when we were able to complete the mating of the turret head and the turret support structure with a tolerance of just 6 mm. Close accuracy has been vital throughout the whole operation and it’s a testament to the skill of our personnel that these manoeuvres have been carried out so well.”

The project concluded in December 2017.