Heavy lift and transportation specialist ALE has completed heavy lifting activities for the RRS Sir David Attenborough – a new polar research vessel to be operated by the British Antarctic Survey.

ALE was contracted to carry out on-site transportation, load-outs, lifting and barge work of ship segments weighing a combined total of 17,500 tonnes by shipbuilder Cammell Laird in Birkenhead, UK. 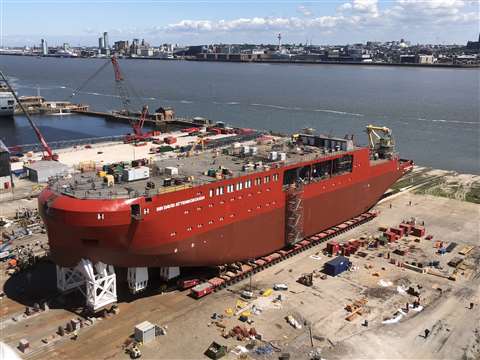 The project lasted a total of 15 months and was split into several phases.

Once the shipbuilders had built the stern section in two halves, ALE performed the weighing, jacking, skidding and transportation of the two sections and joined them together using SPMT. As part of its full-service package, ALE also provided the grillage design, sea-fastening, and load-out of the stern section.

To enable the forward end of the vessel to be constructed, the RRS Sir David Attenborough vessel was moved 40 metres down the slipway using 228 axle lines of SPMT. For a cost-effective move, ALE said it designed bespoke transport frames and utilised transport beams to enable the vessel to be lifted and avoid the costly welding to the vessel.

In July 2018, the complete hull, measuring 129 m long and weighing 10,000 t, was moved 120 m down the slipway to its final launch position using 300 axle lines of SPMT. Once launched, the vessel was moored in Cammell Laird’s non-tidal wet basin whilst waiting for the final block, which weighed 535 t. As the final block was so tall, it had to be built separately and lifted into position. The final move involved transporting the block and lifting it in tandem with ALE’s LR1750 crawler crane and AK912 pedestal crane onto the vessel.

John Davis, senior sales manager for ALE said, “We are extremely proud to be so involved in such a landmark project and it really showcases our ability to provide customised solutions for the shipbuilding industry. The priority was to find the best solution possible at each stage to increase client savings and reduce disruptions to the overall project schedule. All equipment, design and engineering were provided in-house by ALE, with no third parties involved.” 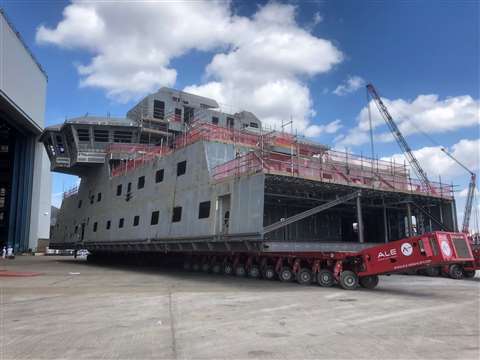