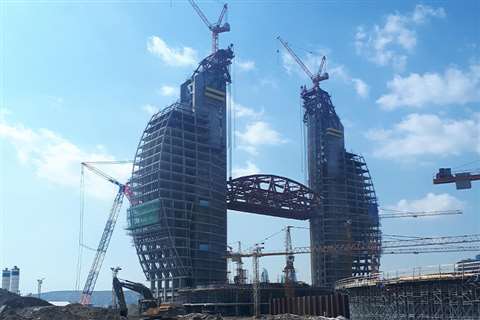 Heavy Lift company ALE has installed a steel bridge weighing 2,100 tonnes in between the two towers of a hotel, at a height of 120 metres.

Part of a new development called Crescent Bay in the capital of Baku in Azerbaijan, the seven-star 28 storey La Luna hotel was designed in the shape of a crescent and covers 125,000 square metres.

Measuring 72 metres high and 20 metres wide, the company said it used a bespoke methodology to manoeuvre the curved steel structure into place.

The bridge was constructed at ground level to minimise work at height and then raised on specially designed strand jacks. The beam assembly comprised jacks, beams, clevises and strand jacks, which were mounted on each of the hotel’s towers at more than 135 metres above ground level.

Dan Kempin, ALE business development manager for offshore services, said, “This area can experience wind speeds of up to 80 km/h and therefore we knew our lift monitoring solution had to be optimised for immediate reporting on wind speed and load displacement. The bespoke design of our strand jack monitoring process ensured ALE could continue to operate within a greater window of wind speeds, as we could monitor the real time wind effect – maximising the client’s operational time. We did this while still conducting the safest operation possible.”

According to ALE, the bridge is the heaviest object ever to be lifted to such a height using the method. The company said it will perform two further lifts on the project, which is scheduled for completion in 2021. 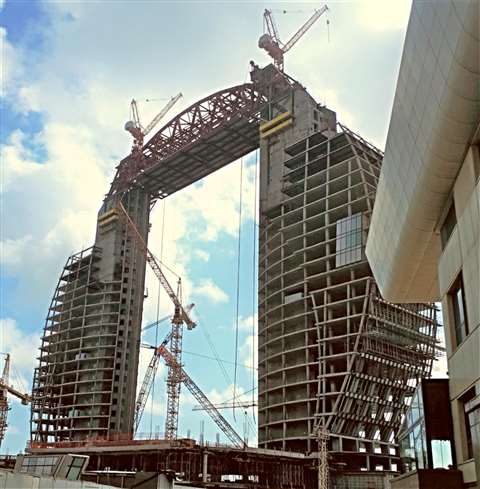