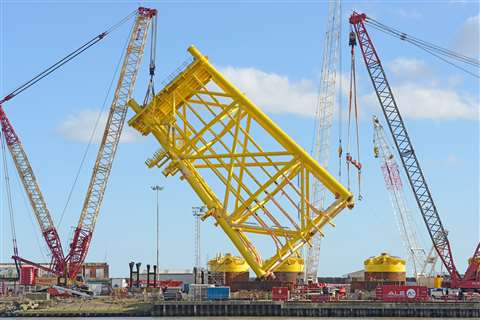 ALE’s UK branch has jointly won the ‘Best Energy Project’ award at the East of England Energy Group Awards 2016 for its collaboration when undertaking jack-up and roll-up operations in Suffolk, UK.

As part of the Dudgeon offshore wind farm project, ALE was given the scope of lifting components, performing multiple site moves, rolling up and jacking up the jacket, and loading out the jacket and topside at Sembmarine SLP’s fabrication site in Lowestoft, Suffolk.

ALE used its award-winning Mega Jack 800 jacking system for the first time in the UK to jack up a 954 tonne jacket to 14 metres high, as well as its AK912 crane to perform the roll up operation.

ALE won the award jointly with the client and the designers of the suction buckets. The winning project was based on collaboration and innovation in its use of ground-breaking technologies and the cost reduction shown in this offshore wind project. The wind farm will have the capacity to power around 410,000 homes in the UK.