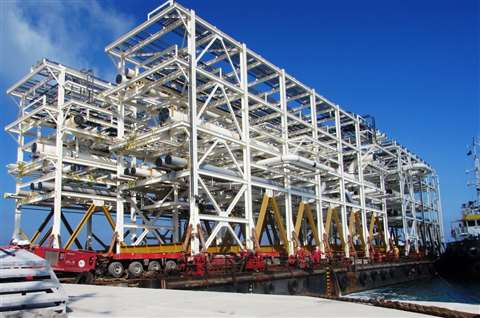 International heavy lift and transport company ALE is operating on one of the largest offshore projects, SARB4 (Satah al-Razboot), which is currently under construction offshore in Abu Dhabi, UAE.

ALE is executing the weighing, land and marine transportation, lifting and installation as well as the engineering, ballasting and sea fastening for an offshore oil field project that is located about 140 kilometres northwest of Abu Dhabi, UAE.

The company’s UAE branch was awarded an 18 month turnkey project contracted to deliver numerous pipe rack, process modules and substations, weighing between 170 and 1,700 tonnes, from Mina Zayed Port and various fabrication yards via the Arabian Gulf, to the project site on Zirku Island.

During this project, ALE will be using a variety of heavy lift cranes and transport equipment including ALE barges, SPMTs and crawler cranes.

Shafic Tillawi, project manager at ALE, said, “This is one of the largest offshore projects that ALE Middle East has been involved in. By providing multiple trips offshore for super heavy lifts, as well as a full package of services and techniques, it demonstrates our overall capabilities. As we approach the next stage, we are preparing to handle and load-out larger and more challenging modules, with some modules as heavy as 1,700 tonnes.”

The oilfield is expected to add an additional 100,000 barrels per day of oil to the overall oil production capacity of UAE upon commissioning in 2016, the company said. The islands will serve as bases for drilling the oilfield and eliminate the use of offshore rigs. The project will involve drilling of 86 oil wells. Oil drilled from the wells will be transferred via a subsea pipeline to a new facility to be built on Zirku Island for processing, storage and export. The processing facility at Zirku Island will have a capacity of 200,000 barrels of oil per day.

The first operation for ALE took place in June 2015.