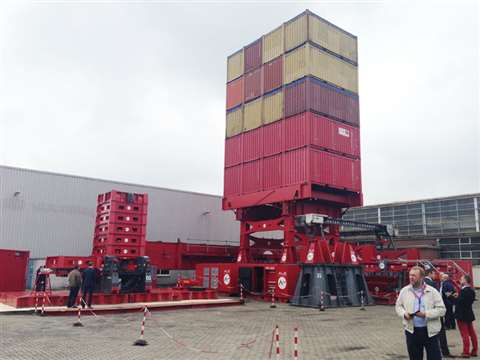 Heavy lift and transport service provider, ALE, based in the UK, has revealed a new addition to its Innovation Series, the Mega Jack 800.

The Mega Jack 800 is based on the design of the Mega Jack. It is made up of 800 tonne capacity jacking towers, which can be combined with a starter beam to create capacity loads of 1,600 and 2,400 tonnes per jacking point. The system can also be used with skidding systems.

The Mega Jack has automated programming and operation of the cassette feed-in system, a spokesperson added. In addition, the jacking cassettes plus starter beam and end cassette can be bolted together to take up to a massive 25 % uplift per corner. Ronald Hoefmans, ALE group technical director, said, “This gives the un-braced system an enormous horizontal load capacity.”

Harrie Smetsers, ALE research and development manager, said, “We conceived the idea of the Mega Jack 800 through careful analysis of the current market, and identifying areas for improvement in efficiency. We believe we have created a system which integrates successfully with current solutions by bridging the gap in capacity, and enhancing the capability we can offer.”