All new from JCB 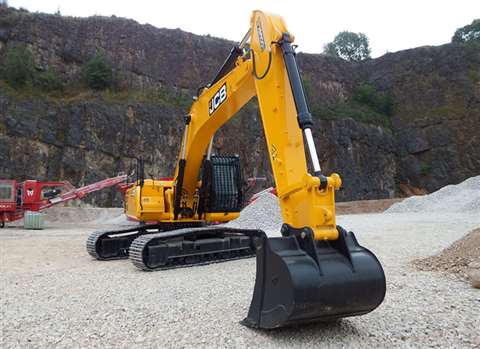 The new JS300 features a simplified mode selection system and quieter cab than the JS290 it replaces.

Perhaps one of the most interesting areas is the midi excavator segment. It is a difficult area to define, but the general meaning of ‘midi’ is bigger than a mini excavator, but smaller than mainstream excavators, so about 6 to 10 tonnes operating weight.

New additions in this area include the 6.5 tonne class 65R-1, a reduced tailswing model – a replacement for the 8065 RTS, and the 67C-1, a conventional overhanging counterweight design for the North American market.

Meanwhile, a brand new addition to the range, which also includes 8 tonne machines is the 100C-1, the first 10 tonne class excavator JCB has ever built. The company says it is based on the frame of the 8.6 tonne 86C-1 midi machine, but with a more powerful engine, larger dig end and increased hydraulic capacity to boost performance. Key markets are seen as France, the UK and US.

The traditional overhanging counterweight machine offers a maximum digging depth of 4.6 m, a dump height of 5.6 m and a reach at ground level of 7.5 m. Power comes from a 55 kW Kohler engine, which meets emissions regulations without the use of a bulky diesel particulate filter. JCB says this power unit offers a 10% fuel saving compared to competitive models. The 100C-1 also has an engine auto idle function, which drops engine revs after a pre-determined period of inactivity up to 30 seconds.

Another important feature is that all the service intervals – including greasing – are 500 hours. A JCB spokesman said, “The 500 hour greasing interval is probably only twice a year, compared to weekly or daily on other machines.”

Further up the weight range, JCB has added the new 30 tonne class JS300 crawler excavator, which replaces the JS290. At some point in the future, one would expect this machine to be powered by JCB’s own six-cylinder engine, which was unveiled last year. For now however the Tier 4/Stage IIIB machine features a 161 kW Isuzu unit.

Operators will appreciate the reduction in internal noise – it is now just 70 dB(A) in the cab, and other features include a high specification seat and 7" (178 mm) LCD monitor.

Selection of the power modes has been simplified with the use of a single rotary control. As this dial is turned the engine speed increases through four pre-set power bands, and there is also a separate power boost function.

Meanwhile in the wheeled excavator sector, JCB has added the 20 tonne class JS200W and the 17.5 tonne JS175W, which are now powered by the Tier 4 Interim/Stage IIIB JCB Ecomax engine. Though smaller in capacity than the previous engine, JCB says this offers the same 129 kW output, with an improved 690 Nm of torque, yet as well as up to 10% lower fuel consumption with no loss of performance.

Other improvements are similar to those on the JS300, with a new monitor and rotary power control in the cab. A change to the control system means steering the wheeled excavators can now be handled from a rocker switch on the right-hand joystick, which means operators can move and steer the machine while also moving the boom.

For travelling between sites there is a new highway mode that isolates the hydraulics from the boom, slew, arm, stabiliser and dozer. The upper structures of the machines must be properly aligned with the lower chassis to ensure safe operation on roads, with an indicator on the display to warn the operator if this has not been set.

Another significant launch for JCB is the 457 wheeled loader, which was first shown to the public at June’s Hillhead exhibition in Buxton, UK.

Power comes from a Tier 4 Final 186 kW MTU engine, which achieves emissions compliance with just selective catalytic reduction (SCR) and no DPF. JCB said this machine is 16% more fuel efficient than the model it replaces.

The 457 is also the first model in the JCB line to feature the company’s next generation Command Plus cab, which will be rolled-out across the whole portfolio in time. The operator can now benefit from an uninterrupted panoramic view to the front with the

A pillars being moved out and round the cab. On the 457 there are two tablet computer-style colour screens, one in the central console and a second at the top of the right hand A pillar. This second screen incorporates access to the loader’s operating menus and acts as a monitor for the machine’s rear view camera.

There is also more space inside since the heating, ventilation and air conditioning system has been repositioned outside the main cab structure. This provides additional storage for the operator, both behind the seat and in pockets in the front and side consoles.

At the other end of the spectrum, JCB has three new models in its compact wheeled loader range. The 406 is described as an entry level model. Its 36 kW engine means it is of a low enough power to be exempt from Stage IV exhaust emission laws, and this helps to keep the price down.

Meanwhile the all new 407 offers a similar payload capacity just above 4 tonnes, but with a 48 kW water-cooled electronically controlled engine from Kohler. Again, there is no DPF in the engine bay. The high performance 409 meanwhile has a 55 kW Kohler engine.

A new feature on all the loaders is a redesigned rear chassis that allows for towing equipment to be installed, or for rear-mounted implements. The 407 is available with an optional high speed transmission, to help with this. Customers can also specify a 100% differential lock in the front axle, for maximum traction when digging and in poor site conditions.

And there have been more new or renewed machines from JCB in the last few months. These include a tracked version of its compact 1CX backhoe loader, special purpose variants of its larger backhoes for pothole repairs and waste management, and new telehandlers, baskets and rough-terrain forklifts in the materials handling area.