The versatile nature of the ‘taxi’ all terrain crane means that the market is looking healthy – for both manufacturers and rental firms.

With regards to new models, big news in the sector is that manufacturer Liebherr has launched the LTM 1230-5.1, which succeeds the LTM 1200-5.1. Its telescopic boom is 75 metres long – three metres longer than that on the LTM 1200-5.1 – while its lifting capacity has increased by an average of 20 percent, taking it to 230 tonnes. With lattice extensions, the maximum hook height has been increased to 111 m – ten metres more than on the LTM 1200-5.1.

A range of lattice jibs are available for the new LTM 1230-5.1. An 11.5 to 22 m long folding jib can be mounted at an angle of 0°, 20° or 40°. The folding jib can be supplied with an optional hydraulic adjustment system, which allows it to luff with a full load between 0° and 40°. The pivot point for the folding jib can be raised using up to three straight 7 m lattice sections which, Liebherr says, act as telescopic boom extensions. 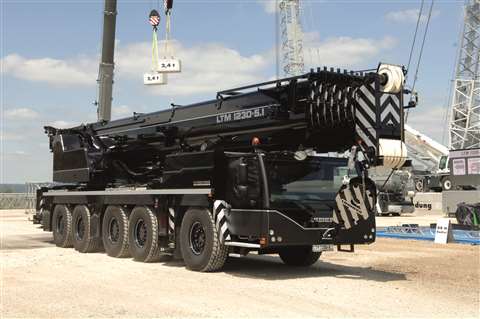 The long, fixed lattice jib that has been available on the LTM 1250-5.1 for the last three years is also available for the LTM 1230-5.1. Liebherr says it enables the crane to achieve a large radius, thus making it suitable for applications such as hoisting over buildings. A fixed jib, up to 43 m in length, is possible using an additional TF adapter (a connection between the telescopic boom and the fixed jib), a reducer section, and a head piece, says Liebherr. Existing lattice extensions are used for this purpose. This jib can be hydraulically adjusted between 0° and 45° and can therefore be used like a luffing jib, said Liebherr. The existing parts can also be used to assemble a jib up to 39 m in length for steep working positions.

The maximum ballast for the new LTM 1230-5.1 remains at 72 tonnes – the same as for the LTM 1200-5.1. Liebherr explains, however, due to the adjustable VarioBallast system (which can be adjusted from 4.8 m to 5.7 m) the lifting capacity at greater radii has been significantly increased compared to the LTM 1200-5.1 and also the LTM 1220-5.2. Liebherr says the new crane is its first to have an asymmetrical support base, which is 7.4 m wide at the front and 8.1 m at the rear. This, combined with the VarioBase and support base, means it is now possible to generate high lifting capacities, Liebherr said, particularly at the rear working area.

The lifting capacity is calculated in real-time by the LICCON controller.

A six-cylinder Liebherr diesel engine in the undercarriage develops 400 kW (544 bhp) and 2,516 Nm of torque. The engine is Stage V emissions compliant. Power is transferred to the crane axles via a 12-speed ZF TraXon gearbox, which also has an eco mode function that is designed to make the vehicle quieter due to a lower engine speed.

Liebherr says off-road use has been optimised through the faster gearshifts that are now possible on the new model, while a hill hold feature assists with hill starts.

The LTM 1230-5.1 has one engine to power both the crane and the carrier. This involves a mechanical shaft powering the superstructure. A drive shaft runs from the engine in the carrier, via bevel gears, up through the centre of the slewing ring to the pump distributor gear in the superstructure. An add-on programme in the drive concept aids with fuel-efficiency, says Liebherr. This means that the complete pump drive can be disconnected automatically when the engine is idling and then quickly reconnected by the intelligent controller when required.

Two years after its launch at Bauma 2016, the ATF 60G-3 from manufacturer Tadano is now available for sale. According to Tadano, the 60 tonne capacity ATF 60G-3 has a drive concept designed to optimise weight distribution, resulting in a 10 tonne axle load configuration. To achieve this required a redesign of the axle layout and placement of the engine, says Tadano. This means the ATF 60G-3 has two front axles and one rear axle, while the undercarriage and superstructure are driven by an engine installed on the superstructure. This setup, Tadano says, distributes the main boom’s weight more efficiently on the axles and shifts weight to the rear. 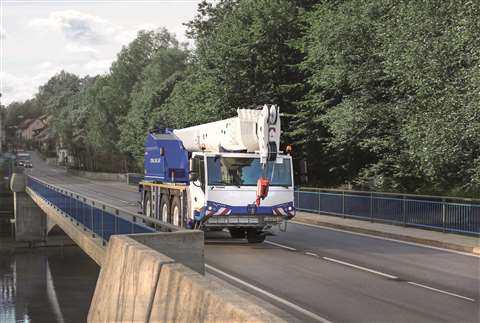 The ATF 60G-3 has a 20 tonne hook block in its 10 tonne axle load configuration, which enables it to lift up to 17.1 tonnes. In addition, the three-axle crane has been optimised for axle loads of 12 tonnes, 13 tonnes and 16.5 tonnes, says Tadano.

The engine is at the rear which means the cab is quiet, Tadano explains. Also, because the engine and exhaust system are mounted behind the superstructure cab, and always pivot along with it, the operator is not exposed to exhaust fumes, it adds.

The crane’s dimensions (11.18 m long, 2.66 m wide and 3.68 m high) mean it is suitable for jobs with limited ceiling height, such as in halls or refineries says Tadano.

Wisconsin, USA-headquartered crane manufacturer Manitowoc has unveiled its new all terrain crane, the Grove GMK4090, at its Crane Days event at its Shady Grove headquarters, Pennsylvania, USA, in June.

The crane, which will be available globally, has a 51 m, six-section Megaform boom that utilises Grove’s Twin-Lock pinning system. A 15 m bi-fold swing-away jib can be extended with a 6 metre boom extension for a total jib length of 21 m.

The GMK4090 can travel with up to 18.3 tonnes (20.2 US tons) of counterweight and transport up to 9.1 metric tons (10 tons) whilst remaining within the limit of 12 tonnes (13 tons) per axle without requiring an additional transport truck. The distance between the front and rear axle groups was extended beyond the 2.4 m minimum requirement for bridge laws in the USA. 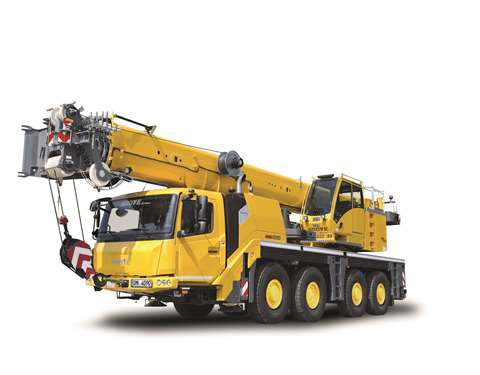 The GMK4090 from Manitowoc

The crane has a width of 2.55 m and a minimum tail swing of only 3.5 m, so it stays within its maximum outrigger width. Manitowoc’s Maxbase variable outrigger setting is available as an option.

The GMK4090 has Manitowoc’s Crane Control System (CCS), that has been standardised across the company’s crane offerings and is featured on every new model.

The crane was introduced to customers and dealers at the company’s Crane Days event at its Shady Grove headquarters, Pennsylvania, USA in June.

Heavy lift and transport specialist Sarens has bought 44 new Demag all terrain cranes from Terex Cranes which will be used to boost the company’s presence in London and Paris and to help the company renew its European fleet.  The cranes will be built and delivered throughout 2018 and 2019. The order includes: 12 Demag AC 100-4Ls; ten Demag AC 130-5s; seven Demag AC 60-3s; seven Demag AC 220-5s; six Demag AC 55-3s; and two Demag AC 160-5s. This order follows one for 15 Demag AC 130-5s, placed earlier in the year. 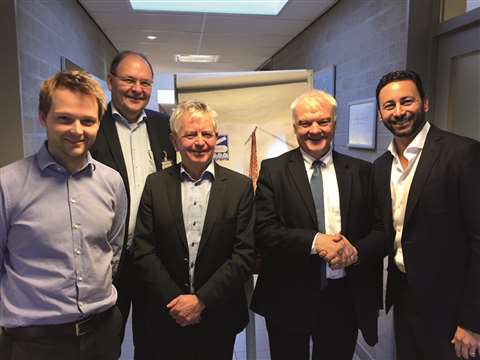 Towards the end of 2017 crane manufacturer Terex Cranes launched the three-axle Demag AC 45 City to succeed the AC 40 City in the 45 tonne lifting capacity class.

The crane is compact and has a short base boom of 7.8 m. This, combined with options like the boom head traverse for increased lifting heights, means the AC 45 City can work in buildings with a relatively low clearance while still keeping its boom at a steep angle, enabling it to lift heavy loads indoors, Terex says.

“An integrated lifting capacity radar calculates the working range within an angle of +/-30° and shows it on the IC-1 Plus control system’s monitor. It also has an automatic counterweight detection function that the crane operator needs to confirm.

According to Terex, reception to the new model has been good and the company has received orders from around the world include three models for global lifting equipment supplier CraneWorks, for use at its Denver, Colorado, location, and one order from Swiss crane and transportation company Matthey-Petit, among others. 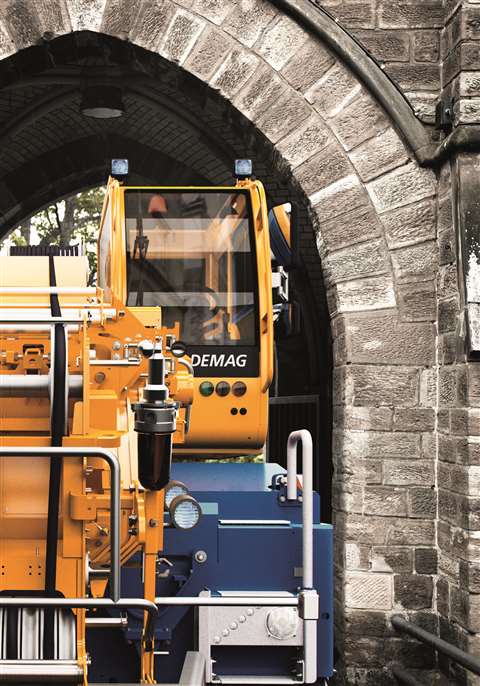 The Mammoet Americas division of global heavy lift and transport specialist Mammoet has expanded its fleet with the purchase of 11 all terrain cranes as part of efforts to expand its presence in the crane rental market in Texas, USA. The cranes range in capacity between 120 US tons (109 tonnes) to 550 US tons (499 tonnes) and will arrive in Texas before the end of summer 2018. The first AT, a Liebherr LTM-1130-5.1, has already been delivered.

“The new all terrain cranes will enable us to deepen our presence in Gulf Coast plants and fulfil our clients’ requests to provide day cranes on top of the project work which Mammoet is so well-known for,” stated Pierre Mille, branch manager of Mammoet Americas Texas East. 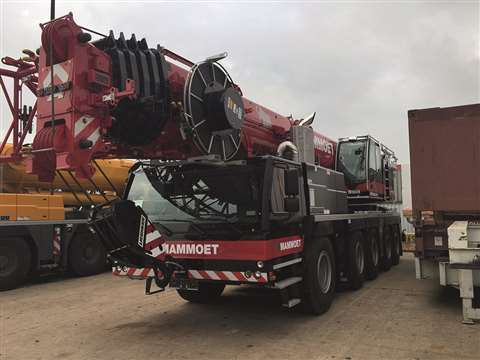 All terrains in the Americas 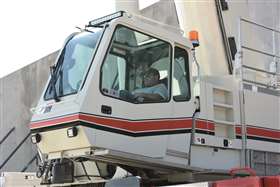 According to Rick Curnutte, Link-Belt’s product manager of telescopic truck and all terrain cranes, “Our all terrain cranes are designed to be simple to operate and maintain, which makes them popular in all markets, especially in developing markets where seasoned operators can be hard to find.” Link-Belt also says it has focused on minimising the number of overflow loads required. “We save one to two overflow trucks every time one of our ATs goes out because we design the overflow loads to be under 20,411 kg,” says Curnutte. “If the ATC-3210 and ATC-3275 is better by just one less overflow load every time it goes out, think of the money saved.” 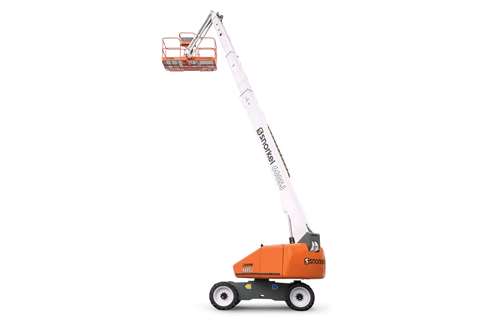