Peter Douglas, who recently joined IPAF as its new CEO and managing director, was an IPAF member representative on the UK Country Council, which was instrumental in instigating this project to collate, analyse and present findings that informs all the work IPAF does. It is important to emphasise that all incidents recorded by IPAF are completely anonymised, so no individual or company can be identified or judgment made about the incident.

Douglas’ vision for and commitment to IPAF’s accident reporting project is undimmed. In 2020, IPAF publishes a new, enhanced Global MEWP Safety Report, presenting key findings from the detailed analysis of accident statistics. As in previous years, the most common underlying causes of incidents involving MEWPs are identified, but the new report also looks at lost-time incidents, not just fatalities. Incidents have also been categorised in terms of where they happened, in what industry sectors they occurred and broken down in more detail by type of incident 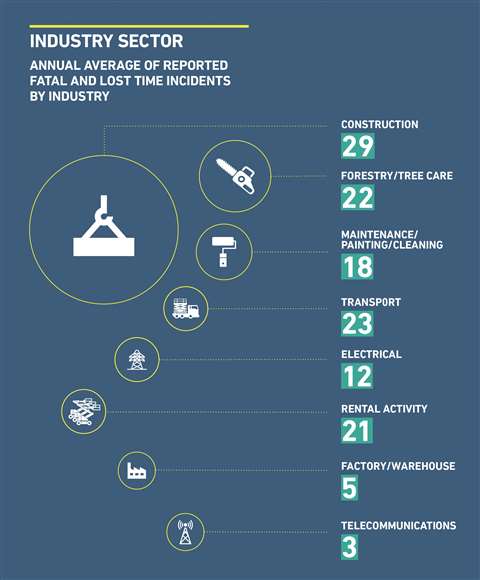 There is a new methodology to much of the analysis and the way the findings have been presented, the report being interspersed with key recommendations to mitigate common risks. One major change is that, rather than comparing a full year’s accident data to previous years, the most recent three full years of available data have been combined to produce an aggregate and average number of incidents, to better identify trends rather than looking at minor fluctuations. The number of reported MEWP accidents and deaths worldwide is relatively small, so combining data into a larger overall set allows trends over time to be more readily identified.

Another change in methodology is that, while data is still predominantly reported by IPAF’s members through the accident reporting portal, data gleaned from publicly available sources such as OSHA accident reports in the US has been looked at in more detail. Indeed, several accidents not initially classified as MEWP-related have been discovered through this painstaking re-examination of reports, with the result that a number of new accidents not previously recorded have been identified and inputted into the database. All told incidents were reported from 25 countries worldwide, a significant improvement on just a few years ago, when around 95% of all reports were being received from the UK.

In addition to this Global MEWP safety report, IPAF will offer additional detailed analysis specifically to IPAF member companies engaged with and inputting into the accident reporting project. IPAF is keen to encourage all members worldwide to realise the importance and value of feeding into this database, especially recording near-miss and non-injury incidents as well as more serious ones resulting in injuries and fatalities. By tracking more of this information over time, around the world and across different industries, IPAF and its members can help to calibrate the safety and training agenda accordingly and to most effectively influence the development and implementation of MEWP design and safety standards.

The 2016-18 Global MEWP Safety Report takes a different approach to those previously published by IPAF. There is much more information presented, and data is broken down and compared in different ways to show trends and compare accident statistics across industry sectors. Using an aggregated data set to create an annual average across the three years under study shows us that the five main causes of deaths in MEWP incidents were falls from the platform, electrocutions, entrapments, MEWP tip-overs and MEWPs being struck by another vehicle. This is broadly in line with previous years’ fatal accident analysis and demonstrates yet again that the industry should focus on ways to reduce the underlying factors common to these types of incident.

Analysis of the data shows how serious these accidents tend to be, with the outcome almost always proving fatal. One footnote to consider of course is that accident reporting is most likely to take place when a death occurs, but perhaps less likely in cases of minor injury or near miss. If this is the case, it reinforces the case for reporting all incidents, including near misses, not just ones resulting in serious injury or death – additional data aids closer analysis and affords vital lessons that can be used to prevent all accidents and ultimately save lives.

IPAF’s data analysis shows that a slightly lower proportion of total reported accidents are fatal in construction than in tree-care; is there something in the working practices on controlled construction sites that is saving lives that could be applied in other sectors such as tree-care? Is it perhaps down to the type of accident that occurs more commonly in tree-care, for instance electrocutions are by far the most common cause of death in this sector, owing to machines coming into contact or proximity with high-voltage powerlines? The variance may also point to wider reporting of non-fatal accidents on construction sites; this highlights the need to improve reporting across the board, with vital lessons to be learned from near misses and incidents with less serious outcomes.

The new report also looks at the location of reported incidents. This indicates two things: The greater overall usage of MEWPs operated on controlled work sites or rental company premises means there is proportionally a higher number of serious incidents and fatalities when MEWPs are operated in non-controlled areas such as alongside roads or in public places. This aligns with the messages in IPAF’s Street Smart safety awareness campaign, which highlights the heightened risks involved in working near to roads, rail and in public places, and outlines key measures to mitigate these such as segregating MEWP operations from pedestrian or vehicular traffic.

It is worth noting that incident reporting culture seems more ingrained in a factory or warehouse, on a construction site and on plant-hire premises than it is wherever MEWPs are being used away from controlled and regulated environments. This provides additional incentive for IPAF and its members to gather as much data from across the whole spectrum of MEWP usage, to help formulate safety campaigns, tailor training and best practice guidance to mitigate heightened risks and reduce the number of incidents occurring in public places, alongside road or rail or in remote locations, perhaps working in forestry or powerline maintenance.

One final point to consider is that around three-quarters of the data in this report has been supplied by IPAF members. Therefore, it bears the potential to be skewed by the areas or sectors that IPAF’s members most typically operate in. This underlines why IPAF needs the help of everyone in the powered access industry, whether members or not, to engage with the reporting project and to help improve the available data.

Subsequent to the publication of this industry-facing report, IPAF will prepare and supply more detailed analysis to any member company that has fed into the reporting project, in order that they can ensure their own safety and training protocols and workplace risk management are as effective as they can be.

All people including users and owners of MEWPs are encouraged to report incidents involving MEWPs, Mast-Climbing Work Platforms (MCWPs) and other types of lifting equipment. Specific details such as names, location, machine brand are not required to report an incident. To ensure objectivity, all identifying information is automatically redacted prior to analysis. This project does not apportion blame or responsibility.

Reporting is available in multiple languages. Users can sign in to the IPAF portal or report anonymously with one click. Using drop-down screens and selectable icons provide as much information as possible about the incident, including details such as when it occurred, who was in charge and who was affected, what was the outcome, what was the MEWP category, how was the machine being used and what happened.