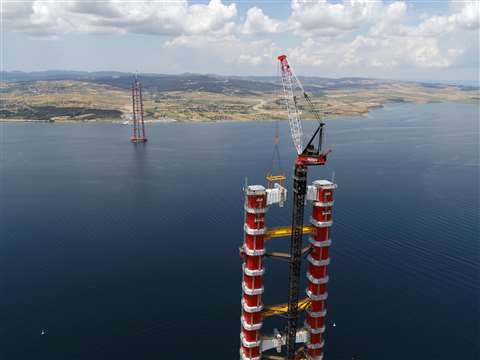 Marr Contracting has completed what it claims as another world record lift for a luffing jib tower crane, this time in Turkey.

The Australia-based heavy lift tower crane specialist made the lift as part of its work to construct what will be the world’s longest span suspension bridge, the 1915 Çanakkale Bridge across the Dardanelles Strait. Its overall length will be 4,608 metres, the central span will be 2,023 metres and the bridge tower height will be 318 metres.

Marr’s 330 tonne capacity Favco M2480D heavy lift luffing jib tower crane, one of two on the site, lifted 155 tonnes at a height of 318 metres. With the top of the crane standing 328 metres above the water, it took around 30 minutes to lift the centre section of the bridge’s upper cross beam into place. Working on the Asian side of the Çanakkale Strait, the lift was a major milestone in the construction of the bridge.

It took place at midnight on Sunday 7 June 2020. On the European side the lift was completed 24 hours later.

Key to the plan was using the heavy lift tower crane’s ability to carry heavy modular sections, instead of having to lift and then weld small pieces of steel together at height.

According to Alper Alemdaroglu, deputy project manager, DLSY Joint Venture wanted a heavy lifting partner who could think outside-the-box to make their vision for how they wanted to build the Bridge a reality. “The Men From Marr’s have a reputation for technical competence and innovative thinking in developing strategies for heavy lifting on projects of this scale, but what has impressed us most is their collaborative approach to finding a solution that suited our construction methodology and programme, and then delivering it.”

Simon Marr, Marr Contracting managing director, said, “DLSY knew what they wanted, and they were also open to a non-traditional heavy lifting solution. As experts in construction, the Joint Venture partners respected our expertise in heavy lifting and together we have been able to construct the tower stage of the project in record time.

“The unparalleled lifting capacity of our M2480D HLL cranes have been a game changer for this project and will potentially change the way our industry looks at how bridges can be built, as well as a host of other large scale projects. We are using the same way of thinking to challenge methodology on the construction of other projects, including metro train stations, data centres, large commercial construction, energy construction and working refineries,” Marr continued.

Installation of these two M2480D giants on the project was spectacular in itself. Fully assembled in a dry dock, the cranes, each weighing 600 tonnes, were lifting using a floating crane and transported 1 km to the caisson in the middle of the Dardanelles (the Canakkale Strait). That part of the job was done withing a day.

The Çanakkale bridge will connect the towns of Gelibolu (Gallipoli) on the European side of Turkey with Lapseki on the Asian side. Its name honours and remembers the “Çanakkale Wars” (1915-1916) that took place between Turkish and Allied forces during the First World War near the site of the new bridge. An international team, including Australians, Turks, Koreans, Dutch, Japanese, Iranians, Filipinos and British is working under Covid-19 restrictions. 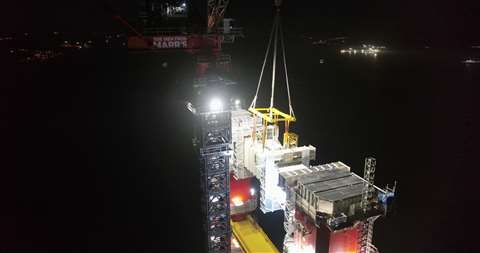