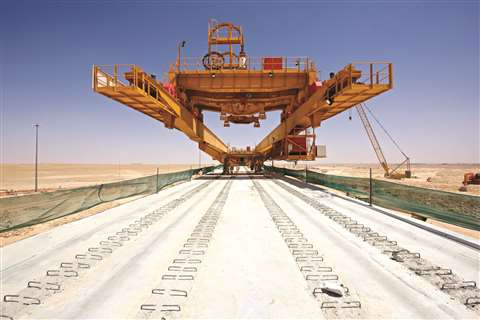 Driven by a combination of legislation and cost pressures, the construction industry is seeking out ways to reduce its carbon footprint.

Indeed, it has a responsibility to do so, considering the huge impact the industry has – some figures suggest buildings represent a third of global emissions, and one third of energy and materials consumed worldwide.

By investing in research and development, companies are coming up with clever solutions that not only make for a healthier environment but also a healthier bank balance, because greater efficiency reduces costs.

To this end, FCC Construcción has set up the SAMCEW (Sustainability Assessment Method for Civil Engineering Works) initiative, which is an award-winning internal tool for measuring the sustainability of its civil works.

The methodology allows the Spanish-based company to plan a project, identify areas for improvement and share the advances it makes, working not only on the environmental level but also on the social and economic levels. 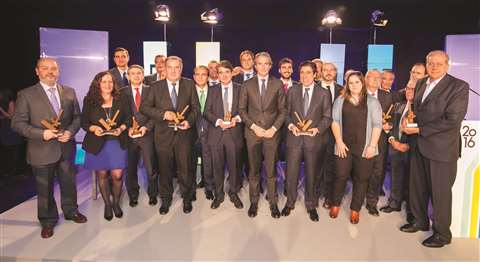 The SAMCEW approach provides a flexible framework for measuring the impact of civil works on each of the three categories according to the individual complexities and specific circumstances of the project in question.

FCC said the method improves the eco-efficiency of its construction processes, which is certified according to ISO 14001 in 20 of the countries where the company operates – which accounts for 95.5% of the company’s overall operations.

Lucía Monforte Guillot, from the department of environment at FCC Construcción, said, “So far, a pilot test has been carried out on the Riyadh Metro works. One of the objectives of the company for 2017 is to apply the methodology for the evaluation of sustainability to more of its own significant works.”

FCC also has its own Climate Change Strategy, which specifies a protocol for quantifying greenhouse gas emissions caused by its construction work. This encourages better practices with regard to energy efficiency, recycling and the use of alternative fuels, including renewable energy. 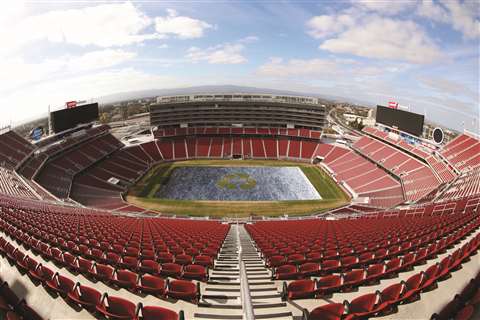 Xylem said its water solutions save 190 million litres of water per year at the Levi’s Stadium in Santa Clara, California, US

The company said its commitment to sustainability reaches beyond its immediate sphere of influence to the suppliers it chooses to work with, demanding that they respect the environment and implement policies to prevent occupational hazards.

In a similar effort to foster a culture of better practices, LafargeHolcim has laid out a 2030 Plan, which works across the same three key areas of sustainability – environmental, social and economic.

The plan has a wide scope that ranges from materials manufacturing and product development to building design and construction methods.

LafargeHolcim said the plan covers its partnership initiatives with the entire construction chain. The aim is to enable transformation in fields like carbon savings down the value chain, energy efficiency in buildings, responsible sourcing of construction materials and common methodologies and tools to measure sustainable performance. 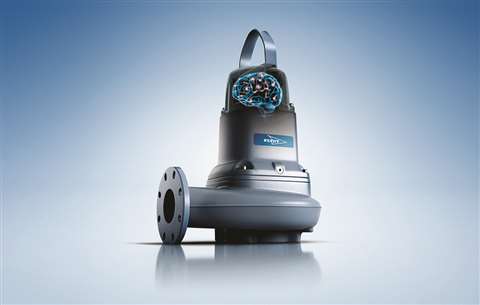 According to Cembureau – the European Cement Association – concrete is the most widely used material in the world, after air and water. So, of particular relevance to the recycling aspect of LafargeHolcim’s plan, the European Union is funding the EnCoRe project, which has developed guidelines for making sustainable concrete from recycled ingredients.

LafargeHolcim’s targets for recycling encompass all of the materials they manufacture, including concrete, and aim to make almost 80 million tonnes per year of resources using waste from its operations. It also wants to multiply by four is volume of recycled aggregates from construction and demolition waste and reclaimed asphalt paving.

One example of aggregate produced using recycled concrete is Aggneo. The company says this high quality material is suitable for a wide range of applications in civil engineering and building projects, such as road base, sub-base, building foundation material, utility trenches and parking areas.

By creating value from waste, LafargeHolcim says it wants to preserve natural resources – the prices of which it predicts will rise in response to population growth and resource scarcity. 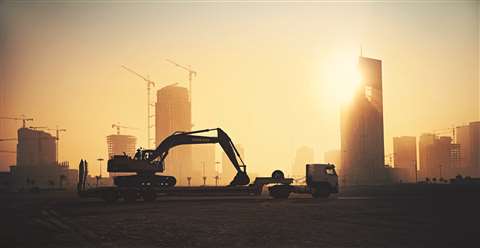 One construction company that has made its works more sustainable with recycled concrete is Bouygues Construction.

The company said that building and civil works generate 250 million tonnes of waste per year, only 40% of which is currently reclaimed. However, the Energy Transition Act – introduced in 2015 to move the economy in France from a traditional, linear model to a circular one – has imposed a threshold of 70% to be reached by 2020.

This has inspired Bouygues to take a new approach, illustrated by a restructuring project it recently carried out on two buildings in Paris.

Conducted by Bouygues Bâtiment Ile-de-France Rénovation Privée, the project, which included an extensive demolition phase, was the subject of a unique experiment.

The 4,000 tonnes of rubble removed from the original site were entirely recycled and, while most of it went on to be used for roadbeds, 720 tonnes were re-used in the preparation of the new concrete for the project building itself.

The work was the product of a partnership with Lafarge Group and made use of the material manufacturer’s Aggneo services.

Aurélie Remetter, the Environment and Sustainable Construction Manager at Bouygues Bâtiment Ile-de-France, said, “With this technique, the building rebuilds itself.”

By converting the rubble locally, transportation of materials was minimised. Bouygues said this meant that the project had a positive carbon footprint, overall.

Moving on to another widely used resource – water – Xylem Water Solutions says that pumping systems account for almost 20% of the world’s electrical energy demand. It follows, therefore, that water technology innovations have a central role to play in supporting the drive for greater efficiency.

The smart city of Lusail, in Qatar, is designed to support 250,000 residents and is part of the country’s Vision 2030

In response to the trend of urbanisation and the prediction by the United Nations Population Fund that there will be 5 billion people living in towns and cities by 2030, governments and city planners across the globe are seeking to develop cities that are comfortable, efficient and sustainable living spaces. It is believed that an important element in this process is the creation of smart infrastructure, which uses the likes of smart meters and data analytics.

In terms of pumping systems, Xylem says the solution will be to make components that have their own internet protocol addresses and are able to communicate with one another.

An example is the Levi’s Stadium in Santa Clara, California, US, where more than 190 million litres of water per year are said to be saved.

With the deployment of such Internet of Things (IoT) technologies and Industry 4.0, the business consulting firm Frost & Sullivan has estimated that operational efficiency could be increased by nearly 45%.

The trend towards smart cities has been supported by Volvo CE, which launched its Building Tomorrow brand campaign in December 2016 to promote the ways in which the company is helping to drive a more sustainable future.

North of Doha, Qatar, more than 240 Volvo machines – excavators, articulated haulers, wheeled loaders and soil compactors – have been enduring 24-hour days, on a three-shift cycle, since 2009 in temperatures of up to 50˚C, helping to clear space for the foundations and underground tunnels of a new sustainable city called Lusail.

Designed to support 250,000 residents, the city is an ambitious vision for the future of Qatar and forms part of the country’s Vision 2030, which aims to transform the Middle Eastern state into a society capable of achieving sustainable development by 2030.

Lusail is being fitted with a district cooling system that features 175km of piping. Once completed, it is said that the central cooling system will be one of the world’s largest and it will save an estimated 200,000 tonnes of CO2 emissions annually. 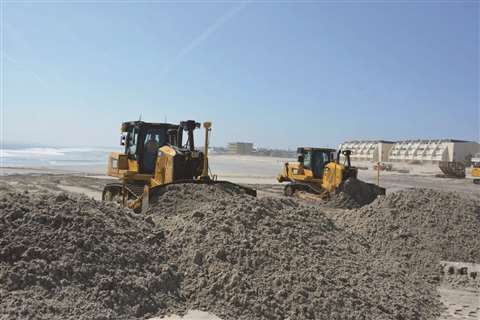 Caterpillar has been supporting natural infrastructure by restoring environments such as the New Jersey Shoreline, US

A 24km waste pipe is also planned to run underneath the settlement to provide an advanced and efficient way of disposing of human waste to recycling and treatment plants outside of  the city.

In addition, residents will be encouraged to adopt a sustainable lifestyle by being provided with alternative modes of transport, including a light railway, a water taxi system and underground pedestrian tunnels.

It is projects like this that bring “alignment and purpose to Volvo CE’s sustainability ambitions,” said Martin Weissburg, member of the Volvo Group executive board and president of Volvo CE.

Caterpillar, on the other hand, has been supporting natural infrastructure projects around the world, which are intended to restore forests, wetlands and other such landscapes.

Caterpillar said that natural infrastructure sequesters billions of tonnes of carbon for productive use in plants and soils.

These sources provide our nourishment and raw materials. And yet, a recent United Nations report, the State of the World’s Land and Water Resources for Food and Agriculture (SOLAW), found that 25% of the world’s lands are now considered “highly degraded” as a result of poor management practices.

Restoring these ecosystems therefore has great potential to reduce carbon emissions, said Caterpillar. According to Ohio State University’s Carbon Management and Sequestration Centre, approximately 1 billion to 3 billion tonnes of in-soil carbon could be locked away, equivalent to around 3.2 billion to 10 billion tonnes of CO2 emissions.

Backed by 90 years of developing relationships with infrastructure businesses, the company believes it is in a prime position to drive the global discussion on the importance of natural infrastructure restoration.

As a result, Caterpillar hosted a national summit in the US, which brought together leaders from various fields in order to establish a coordinated effort. The result was a white paper, Restoring Natural Infrastructure: Strategies for Thriving Communities, Business and Ecosystems, which addressed policy needs, advocacy and awareness efforts, and the business case for restoration and collaboration in the future.