Approval given for Steady Top Feeder

London Offshore Consultants, a UK-based independent marine and engineering consultancy and survey organisation, has given Dutch motion compensation systems specialist Barge Master and Netherlands-based offshore equipment manufacturer, GustoMSC, approval in principle for their Steady Top Feeder concept. According to Barge Master and GustoMSC, this is an important step forward in bringing the Steady Top Feeder to market.

The Steady Top Feeder is a modular motion-compensation platform concept that can be installed on any vessel. It is designed to allow the contractor responsible for installation of the turbines at an offshore wind farm location to have the components delivered next to the jack-up and under the hook of the crane. According to Barge Master and GustoMSC, it provides a steady, level surface from which wind turbine components weighing up to 700 tonnes can be offloaded in seas with swells up to Hs 2.5 metres. According to the two companies, this means operations can continue in more adverse weather, aiding project completion within the allocated time frame.

Both companies believe there is a large demand in the US offshore wind feedering market for such a product and says that it complies with the requirements of US federal law, the Jones Act, because the Steady Top Feeder can be mounted on existing Jones Act compliant barges.

A video of the Steady Top Feeder concept can be seen here: https://youtu.be/hkC5zv3wPeM 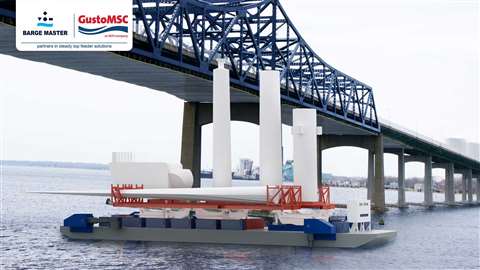