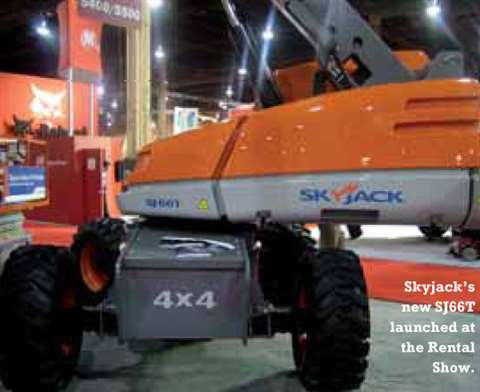 A possible 20% fall in capital expenditure this year by the largest equipment rental companies in the US was one of the talking points at this year's Rental Show, held in Las Vegas 12-14 February, although not all aerial manufacturers were being quite so pessimistic.

Tim Ford, president of Genie Industries, said he was anticipating a -5% to +5% change in the North American aerials market this year; “In October I was very concerned, in December I was concerned, and in February I am cautiously optimistic.” He said the dire economic predictions in the media were being contradicted by what his customers were saying.

Skyjack, meanwhile, said its sales in North America in January had actually reached record levels, with some national rental players increasing their spending with the manufacturer and others taking a “measured approach”, with demand particularly strong for its scissor lifts.

However, US rental consultant Dan Kaplan told AI that he was anticipating a 20-30% fall in spending by the biggest rental companies, and that aerial sales would be impacted.

The show was notable for the number of new boom products on show, including machines from MEC, Skyjack and Aichi (see interview this issue), while other new products included a new range of scissors from newcomer Airtrax (see page 10) and several low level access products, including the PT10 on Bil-Jax's stand (Bil-Jax has the North American manufacturing rights to the CTE UK product), and the first US showing of the small Pop Up push around scissor lifts from the UK's Pop Up Products.

The American Rental Association (ARA), meanwhile, is continuing to forecast rental growth in North America this year, although the market is expected to “soften”. The ARA's latest 'state of the industry' report – launched at the Rental Show – forecast that the market will grow over the next five years at an average compound rate of 4.1% between 2007 and 2012. “We are looking at a soft patch here, there is no question...[but] we are still expecting growth in the long run”, said John McClelland, ARA's vice president of government affairs.