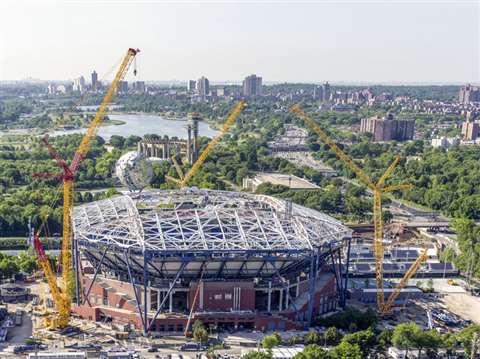 The three crawlers were used to install the steel structure for the roof. Challenges on site include a constricted working area. Kevin Long, Buckner HeavyLift Cranes project manager, said, “The site was logistically challenging. A great deal of planning was required just for the assembly and disassembly of the cranes. Liebherr LR 11000 and LR 1600/2 crawler cranes feature an efficient erection process and short set-up times. That, of course, helps to keep costs down.”

In addition, the foundation and the soil also caused problems, as Long explained, “The maximum ground bearing pressure on site was our main concern. But the Liebherr crawler cranes offer far better ground bearing pressures than the other cranes we considered. At the same time they also provide the lifting capacities and radii we needed. That meant that the cranes did not have to be moved so often which enabled us to save a good deal of time and money.”

The retractable roof is due to be completed in 2017. An LR 1600/2 from Buckner will be back at work on the site for around four months starting in October, a spokesperson said.