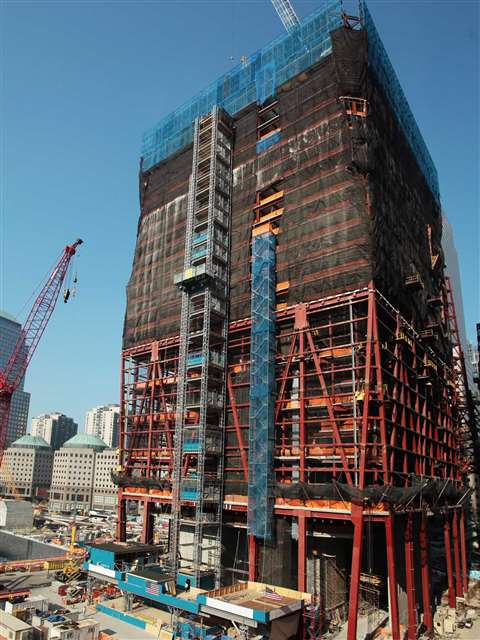 Atlantic Hoisting and Scaffolding chose RAXTAR and Hydro Mobile to provide hoists and mast climbing work platforms in order to help build One World Trade Center formerly known as the Freedom Tower in New York. Both companies have joined forces with New York's Atlantic Hoisting and Scaffolding to create an access solution that transports people and material to each floor of the projected 1,776-foot-high structure. Lindsey Anderson reports.

Tishmann Construction turned to Atlantic Hoisting and Scaffolding of New York/New Jersey to provide a full solution for its logistics concern of moving more than 1,300-1,400 people, tools and materials daily. Tishmann had a set of bid criteria for the hoisting contractors on One World Trade Center and the Memorial building including a non-counterweighted design that topped the list as it related to safety and speed of erecting.

Atlantic Hoisting and Scaffolding's team led by Greg Karas had an idea to address the construction process: the common tower.

A structure typically made from a four-pole configuration of shoring and scaffolding components, decked at each entry level to allow exit of the hoists, and access to the building under construction, to minimize the interference with the curtain wall installation.

This allowed the building to be closed in earlier than in conventional hoist configurations. In the case of One World Trade Center, the extreme height and safety concerns were bringing an additional challenge to the traditional conception of the common tower.

In order to put in place an efficient solution, Atlantic Hoisting and Scaffolding's team had the idea to abandon the conventional four-pole components generally used for the common tower, in lieu of actual rack and pinion tower sections at the four corners.

This gave them a means for adapting mechanical access equipment to perform the construction of the platform in a safe and efficient way.

Atlantic Hoisting and Scaffolding has since placed 13 RAXTAR Model RX3245 hoists throughout the two side by side projects.

Multiple RX3245SFT, 300-foot-per minute, 7,000-pound hoists were designed with an overhead protection deck above the car for installer's protection from other trades who were working above them.

A structural "common tower platform" was an integral part of the configuration of the hoisting areas. And a custom work platform designed specifically for the construction of the Common Tower Structure was built by Hydro-Mobile.

Since its installation in November 2009, the hoists run six days a week.