Atlas Copco Power Technique will show at the International Rental exhibition (IRE) its first ever battery powered LED light tower, the compact HiLight Z3+, alongside a selection of products including WEDA pumps and portable compressors.

The HiLight Z3+ is powered by lithium-ion batteries and has a run time of up to 32 hours. In comparison to lead-acid and gel battery types, it offers up to 20% more Depth of Discharge (DoD), three times more energy density and a lifetime of 6,000 cycles. The tower’s charging time, from auxiliary, grid or a portable generator, is six hours. 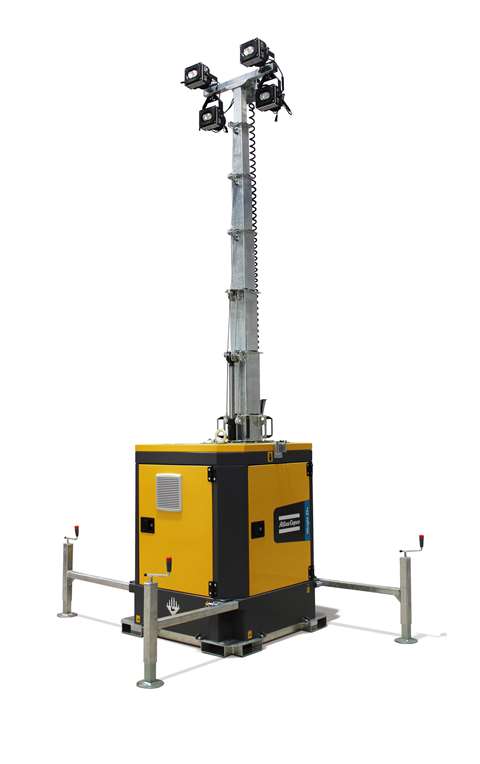 The tower uses a high luminosity lamp comprising four 160 W LEDs, with a life expectancy of 50,000 hours. Combined with specially designed directional glass optics, the floodlights provide light distribution over a 3000 m2 area. The LED lightis are supported by an 8m high hydraulic vertical mast, certified as stable in winds of up to 80 km/h.

At the time of the launch, Félix Gómez, Product Marketing Manager for Light Towers at Atlas Copco’s Power and Flow division, said: “This launch represents a major leap forward in terms of what is achievable with a battery-powered light tower.

”Before selecting the battery type, we undertook extensive R&D to ensure we would provide our customers with the best-in-class performance they expect – not just in terms of running hours, but also reliability, ease-of-use and total cost of ownership. The end result is the HiLight Z3+, which offers a yearly reduction of 1 tonne of CO2 emissions and diesel savings of more than 1,000 litres.” 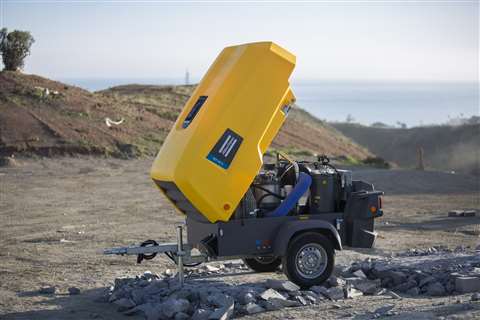 Compressors on display will include models from Atlas Copco’s E-Air range with electric variable speed drives (VSD), which were launched at Bauma last year.

VSD E-Air compressors are smaller and lighter than equivalent diesel air compressors. The E-Air H 250 (pictured), for example, weighs less than 750 kg, which means it requires no special driving licence to tow it in Europe.

Also on show will be a selection of its WEDA electric submersible pumps.