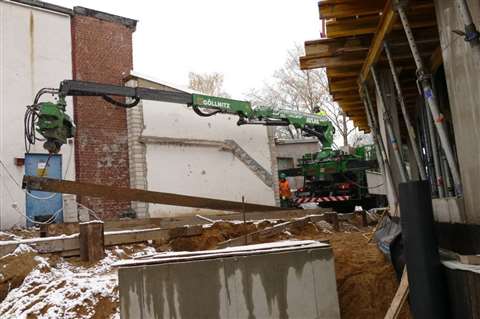 A company in Germany put its unusual truck mounted Atlas loader crane fitted with an hydraulic pile driver attachment to work on a site to handle multiple tasks, including pulling 10 metre piles.

Lifting capacity of the AK300.2V is 4.5 tonnes and reach is 20.5 metres. In this case it was mounted on a Mercedes Actros chassis and operated from a top seat. Its four stabiliser supports have a maximum spread of 4.95 m at the front and 6 m at the back of the truck.

The unit featured is in the fleet of Göllnitz Umwelttechnik GmbH in Germany. It boasts fast operation with few ambient vibrations and it allows for fast travel between work sites, the manufacturer said.

The crane and truck combination is working at a construction site in Hamburg where a six-storey building with about 12,000 square metres of floor space is being erected. The foundation pit had been secured with a wooden lining. Since the shell of the building had reached an advanced stage, securing the pit was no longer required and the wooden beams were removed.

Controlled from a top seat and driven by the onboard hydraulic system, the vibrating piling tool and loader crane did their job. The crane was fitted with Atlas Crane Management (ACM) designed to let the driver fully concentrate on his job while the ACM monitors the safety of the operation.