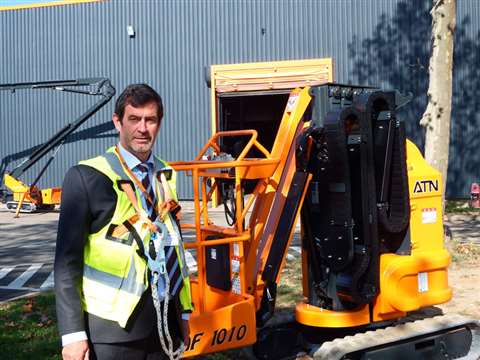 Daniel Duclos, ATN founder and owner, next to the Piaf 1010 at the manufacturer's October Days event last week.

The two day networking and product overview event included testing and a factory tour. Notable products on display were the new Zebra 16 Stab boom, Mygale 23 tracked platform and the Piaf 12E mast lift, launched at Bauma this year. Daniel Duclos, founder and owner of ATN, told AI there are plans for a Hybrid range, with a prototype set to be ready this time next year

The 16.8m working height Zebra 16 Stab articulating boom boasts stabilisers, meaning it can also be used like a spider platform where there is uneven ground. Mr Duclos explained one of benefits is the ability to carry out the same work for which two machines are commonly used. With stabilisers, the Zebra 16 offers 9.3 m outreach, 45% gradeability, and 40 cm ground clearance.

The Mygale 23 tracked platform, on the other hand, is designed to be a spider-type product with the benefits of a conventional self propelled articulated boom. The 22.85m working height machine has the same operating characteristics as a boom in that it is easy to operate and set up, and like all the products designed by ATN are aimed directly at the needs of rental companies.

ATN’s new electric drive mast boom lift Piaf 12E was also on display. It offers 11.83m working height and a 5.1m horizontal outreach. Designed to be light and compact, it has zero tailswing for work in tight spaces.

Plans for the near future include a new hybrid series in which the electric drive works completely independently of the diesel engine. This ‘true hybrid’ system is still in development and will initially be incorporated into the Zebra 16, followed by the manufacturer’s scissor lifts, before being extended to all products.

Mr Duclos said the company is on a steep rise, with about 30% growth year-on-year. Forecasted revenue for 2016 is €16million, with around 600 machines produced. Next year, planned revenue is about €20 million, with some 800 units leaving the factory. And now that Mr Duclos has sold his interest in rental company Accès Industrie, he can dedicate 100% of his time to ATN and developing its products.

See more information about the company and its plans in the November/December issue of AI.