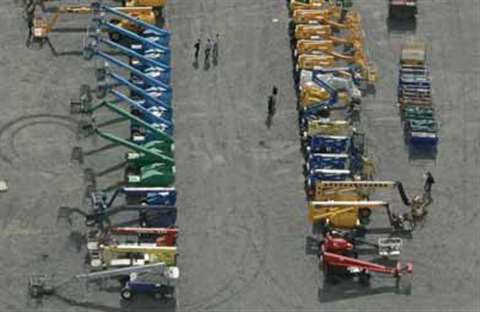 Physical auctions give bidders the opportunity to “kick the tyres" of access equipment. Pictured is a scene from a Ritchie Bros auction last month at its auction site in Moerdijk, The Netherlands.

Sales of access equipment are at record-high levels, and you might think that used equipment is moving at the same pace. However, that doesn't seem to be the case, at least not at the European sales locations of world-leading equipment auction house, Ritchie Bros.

“If the new equipment market is booming, we should see the same in used equipment. That hasn't happened yet,” Cedric Jandet, marketing manager for Ritchie's European operations, tells AI. “If you have the right equipment, the [construction equipment] market is very, very good. But the numbers for access equipment have gone down a little bit.”

Mr Jandet says that's “because there are fewer end-users [owners of] access equipment, there are also fewer consignors. Most sellers are rental companies, and they release their equipment when they receive the new.” Regardless, in any type of market, rising or falling, “the benefit of auction is the same. We try to put the whole, big world in front of the items.”

Mr Jandet thinks things might change in Europe next year, if the trend for used access equipment follows the trend for construction equipment. In the meantime, Ritchie is selling “a lot” of mid-size and small access equipment – working heights up to 12 m – often in lots of 20 to 50 from rental companies. Over the past two years, it has sold worldwide about 6000 scissor lifts and 3300 booms.

“Those sales don't generate a lot of Euros,” he says. Understandably enough, it prefers to sell the less-common, big, high-value access equipment, “That is where the commissions are,” says Mr Jandet. Ritchie's standard commission rate is 14% and 20% for sales under €2500.

He says that “commissions are justified by the sales price we get. The service for the commission paid is valuable for the customer. Is it better for the seller to sell directly and pay for advertising and other sales costs, or to let Ritchie Bros try to get the best price? Owners selling direct don't get the same exposure we give.”

Equipment age varies greatly. “We sell [in Europe] a lot of old and well-used equipment, but we also see a wide range of ages,” says Mr Jandet. “Rental companies [the source of most access equipment auctioned by Ritchie] have different policies and strategies.”

You could expect equipment condition to match that variation in age, and it doesn't matter to Ritchie. It sells each consignment “as is, where it is.” Although the company “... can paint, if the seller wants, to make everything look nice,” few access equipment items are painted, he says.

However, determining machine condition can be important to buyers. Mr Jandet says that many travel to the site to look at the equipment and then return home to bid at the auction. “We don't have many bidding without looking. Most come and look.” He says Ritchie always starts engines for lookers, and they can check performance as long as equipment is not moved.

Although cosmetic appearance might not be a price factor at auction for access equipment, documentation is, according to Mr Jandet. “Having the CE certificate, manufacturers' materials, and history of maintenance and testing usually increases the price,” and Ritchie Bros “tries to make sure sellers understand the benefit of having them.”

Mr Jandet says about 10% of bids in European auctions come over the Internet, while in the US it is 15 to 20%. “The US market is more used to the auction technique,” he says. “Another factor is that the web site is in English.”

There is other geographic market variation, too. “The attitude about auctions in a lot of countries is negative. They are associated with bankruptcy,” he says. Ritchie makes sure of ownership by checking with registration authorities. Doing that is easy in the UK and most western European countries, the source of most equipment it auctions in Europe.

So, geographic factors are important, as Mr Jandet says about getting to auction sites; “It depends on the mentality of people, depends on how people like to travel.” You might say the same thing about buying or selling at auction in general. It isn't about the equipment, it's about people.