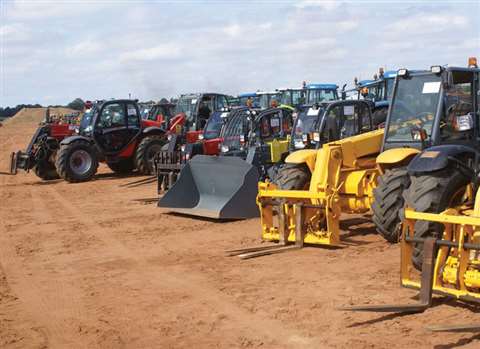 The global used construction equipment market is affected by many different factors – economic, political, regulatory, new machinery – and factors that have an impact globally will also ripple through Europe.

He added that the new and used markets were inextricably linked.

“Demand for used equipment has traditionally been strong in developing countries. Historically, ageing machinery with long working hours tended to be bought up by the South American and African markets.

“However, there are also indications of a growing appetite in parts of Europe, while operators in South America and Africa now demand a more diverse mix of newer and older used equipment.”

He said that reasons for this included the trend for short-term investment arising from limited-time projects where expenditure on new equipment was financially less viable.

“The goal of Atlas Copco,” he said, “is to reach a point where, in any given country, 10% of portable energy revenues come from used equipment.

“Not only does a sophisticated used equipment strategy increase the original equipment manufacturer’s overall market share but it also supports greater sustainability by reducing wastage, cutting back on landfill and making maximum use of resources.”

According to Jonnie Keys, general manager of Euro Auctions, all good quality, low hours machines are selling well across Europe at the moment.

And at Ritchie Bros Auctioneers, Jeroen Rijk, managing director Europe, said, “A strong trend we’re seeing this year all over Europe is that the average age of equipment coming to our auctions is going slightly up. But the drop in new equipment orders in recent years can be seen a few years later in the used equipment industry.”

He pointed out that when there are fewer young used machines re-entering the market, there are not so many ending up in auctions.

“There’s always some young equipment in our inventories, and the ones we do have get a lot of attention. They often end up getting strong prices on auction day.”

Low availability of used equipment is particularly noticeable in the south of Europe, with Spain in particular, he said.

“In the post-economic crisis era, large quantities of equipment from Spanish businesses came into our auctions in order to adjust to market conditions. This lasted up to 2012 and has slowed down since.”

He added, however, that on the bright side, since the beginning of 2016, Ritchie Bros had seen an increase of Spanish buyers at its auctions, looking to source good quality used equipment both in Spain and across the border.

“The north European market is pretty stable, with supply and demand more evenly balanced out,” said Rijk. “But what happens locally can have an impact on a larger scale.”

Paul Williamson, major accounts director at auction house IronPlanet, which has just been acquired by Ritchie Bros, said, “The strength of the European used equipment sales market will always fluctuate, and remains highly dependent on the overall macroeconomic environment and level of buyer confidence.

“Presently, Europe is a seller’s market, primarily due to the large volume of high-quality equipment which is readily available for sale. Naturally, there are certain countries with markets that are more resilient than others within Europe. Ireland, Scandinavia and Eastern Europe appear to be some of the most buoyant territories in terms of purchasing equipment.”

There are fears that the UK’s referendum vote to leave the European Union (Brexit) could be a problem, and affect markets outside the UK.

Keys at Euro Auctions said that to date, there had been no real difference in the European market since Brexit. He said most people believed it would not make any fundamental differences, and did not see a return to hard borders, as advances in technology would do away with customs posts and so on.

“It may mean a little more paperwork but that’s about all,” he said.

The biggest factor, according to Keys, has been the fall in the value of Sterling, which he said would increase interest in UK-based machines, and should help maintain equipment prices from all other non-Sterling countries.

“All the European buyers are well aware of this, and this is evident in our last Dromore, Ireland, sale in late June, post Brexit, with a lot of interest from customers in mainland Europe.”

At Ritchie Bros, Rijk said, “This summer with Brexit, I think everyone in the industry got reminded how interwoven our products and services are across borders. At Ritchie Bros, we got a lot of questions about buying at our UK auctions and witnessed an increase in buyers from the Eurozone at our most recent Donington Park auction, the strong Euro currency forming additional stimulus to buy equipment.”

At IronPlanet, which held its first European unreserved public auction earlier this year, hosted in association with Caterpillar dealer Finning UK & Ireland, Williamson said, “It is unsurprising that the UK is likely to experience an excess capacity of equipment versus the requirement for the foreseeable future as a direct consequence of Brexit.

“Every country requires substantial investments in capital projects and an overall positive economy to drive demand, but unfortunately this is a luxury not every country can have.”

Euro Auctions felt that the type of equipment that was selling well was to some extent governed by the value of currency. Keys said that any UK machines were much more attractive to European buyers now than they had been three months ago. Telehandlers, and utility type machines like mid-sized and mini excavators continued to be sought after, he said.

“Poland had shown good signs of economic growth over the last 18 months, as has Ireland, which seems to be getting busier and the demand for equipment is increasing.”

He added that instances of fraud, scamming and cloning were very common, with the use of letters of credit often used to acquire equipment.

“We just have to be more vigilant and, as such, the process takes a little longer,” he said.

Rijk added, “Another trend is that online sales are growing strongly. Ritchie Bros auctions can be joined both on-site and live online, making it interesting to see the development of online bidding and buying over the years.

“Roughly half of all sales at our globally held auctions are now done online. And even more than half of our bidding activity comes from online auction participants. It helps achieve global market pricing for assets, even in regions where demand for equipment is low.

“People have more and more confidence in buying online what they need.”

At Atlas Copco, Fancini said, “Used equipment, properly maintained and refurbished, can have an active lifespan of up to three times longer than it might previously have had. Therefore, construction equipment, including compressors and generators, are given not only a second life but sometimes a third life at competitive prices.”

He said that the subject of pricing was key to any discussion on used equipment sales models.

“Clearly, prices fluctuate according to supply and demand, but large manufacturers such as Atlas Copco have sufficient market insight to adopt a broader view. Our depreciation model for valuing used equipment is drawn from both new sales intelligence and market price intelligence.”

He said used equipment was “painstakingly tracked” in order to assign an accurate value to it that was both competitive and reflective of the conditions in which it had been used and maintained.

“It is not only the age of the machine in years that must be taken into account, but also the amount of hours it has worked,” he said.