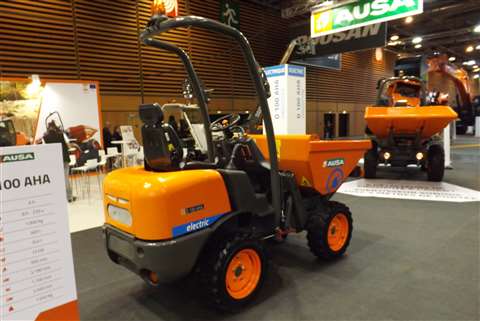 An electric prototype dumper from Ausa has been unveiled at Intermat, along with the first example of a new design for the company’s dumpers – a totally redesigned concept that the company said would be rolled out across its range.

The prototype electric model is based on the D100AHA articulated 1 tonne dumper, which is Ausa’s smallest model.

The company said it was showing it at Intermat to get customer feedback. Among the considerations will be whether customers would prefer a lighter model with an external transformer, or a more convenient integral transformer, which would make the machine heavier.

The batteries run for six hours at full capacity, Ausa said, and can be recharged in eight hours from a normal domestic socket.

The electric machine is said to be smother than the original dumper, with no emissions and much quieter, making working at night a more feasible proposition.

Ausa said it believed the machine to be the first electric-powered dumper with a driving position.

The new design of the regular Ausa dumper range is starting with the D601AHG. The company claimed that it had better visibility and easier servicing, with maintenance accessibility from the ground. It claims to be the first hydrostatic dumper with a limited-slip differential on both axles. 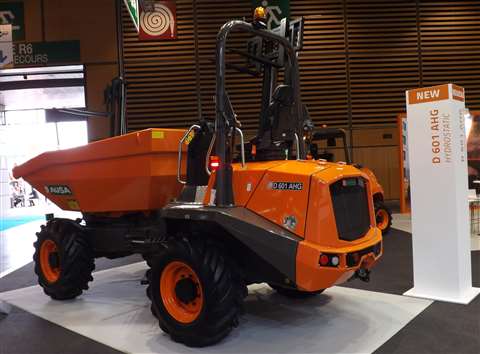 Among its features are telematics, a Start & Stop system, the Full Visibility System, an improvement in several safety parts, and different driving modes for a more efficient fuel consumption.

The Full Visibility System is a safety system that provides two cameras with infrared night-vision, eight proximity sensors and a TFT screen for the driver.

Othe Ausa machines on show at Intermat include the D100AHA, the company’s most compact dumper; the Taurulift T144H Plus telehandler, which, thanks to its reduced weight of 2,400kg and compactness at 1,405mm, can be transported on a conventional light trailer; and the Ausa T235H, which is the biggest telehandler from the company.