Australian mine for ALE 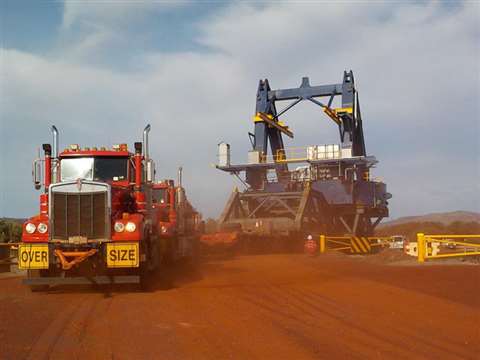 The slew deck being transported to the Port Hedland site

Heavy lift and specialized transport company ALE transported components of a mine reclaimer machine for the Roy Hill iron ore mine construction project in Australia.

The task began in September when ALE was contracted to move three loads weighing between 310 and 320 tonnes. The loads were 15 metres wide and 17 m high. They were transported to Port Hedland in North Western Australia using Goldhofer widening trailers.

Due to the size of the components they were delivered one at a time. ALE used three 240 kW rated trucks and a 30-axle line trailer with a wheelbase of 55.4 m to transport the sections. The convoy transported the loads 540 km over three nights and then travelled by day on the final part of the journey to the site. The total combined weight of the transport was almost 500 tonnes and overall length of the transport configuration, including trailer and trucks, exceeded 90 m.

Neil Vaughan, ALE project manager, said, “We have been using the new widening trailers now for about six months and they are ideal for spreading the axle load required to adhere to the different weight and width restrictions for road transport throughout Australia.

“This is the first time we have configured the trailer in such a way. The specifically designed hydraulic beams, which are fixed to the middle and to each end of the trailer, deliver the width change. By narrowing the trailers for the return journey, we could offer a more time- and cost-effective solution for the client as permitting issues and escort costs were reduced.”

ALE completed the project in April 2015.