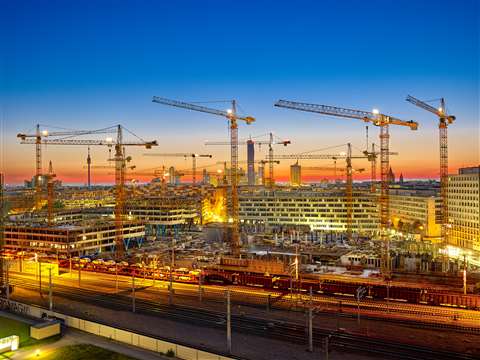 A 303,000 square metre development in Austria is being constructed using 20 Liebherr tower cranes.

The Austria Campus in Vienna is a five storey urban office development by Signa Holding. It is being built on the site of the former Vienna North railway station. In the Second Municipal District of Vienna the EC-H and EC-B series Liebherr tower cranes are working on what is one of the country’s largest projects. As many as 2,200 workers can be on site at any one time.

The development consists of five sustainable office complexes and there’s an hotel, shops, conference centre, medical centre, kindergarten and a canteen. It will require 24,000 tonnes of steel and the 600,000 cubic metres of material excavated would fill 4,000,000 bath tubs, Liebherr said.