Awards Shortlist – Contract over US$1 million

After the Kaikoura earthquake in November 2016, Ceres mobilised demolition equipment from Christchurch to assist in the emergency demolition works in Wellington. Ceres was contracted by Wellington City Council for the demolition of multi-storey building at 61 Molesworth Street, which was in danger of imminent collapse due to the damage caused by the earthquake.

The building was in one of the elite areas of the capital and in direct line of sight from the prime minister’s office. The key challenges on the project were mobilisation, winning the contract, asbestos management, service disconnections and demobilisation.

Erith was awarded the contract to undertake the demolition works at London’s Marble Arch Place in May 2016, inclusive of Marble Arch Tower and an Odeon Cinema at its base. The demolition paves the way for a £400 million (US$ 518 million) development, aiming to improve the western part of Oxford Street.

A number of intricate demolition techniques were undertaken successfully and impressively considering space constraints of the inner city.

The works involved a number of challenges including; demolition of post-tension beams at the cinema, underpinning of the party wall in the adjacent building and around 200 m (656 ft) of sheet piling/basement propping. 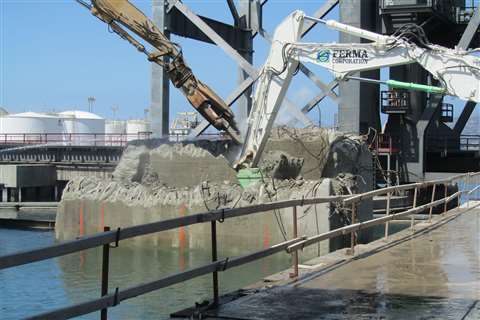 Ferma Corporation was contracted by MCM Construction to remove the existing draw bridge and supporting structures to enable the completion of the new Schuyler Heim Bridge in Long Beach, California. The specific scope of work for this phase of the project included four primary bridge piers. Two of these piers are within the main active channel and extend with their concrete footings to a depth of 19 m (63 ft) below mean sea level.

Deconstruction of the Ramsey County Adult Detention Center (ADC) and Ramsey County Government Center (RCGC) West Buildings in St Paul, Minnesota presented a tough task, but Rachel Contracting stepped up to the challenge. Seven buildings, sprawling 10 storeys tall across two city blocks of a busy metropolitan thoroughfare made for a challenging demolition project. This project was further complicated because the structures were literally built into the bluffs of the Mississippi River in downtown St Paul.