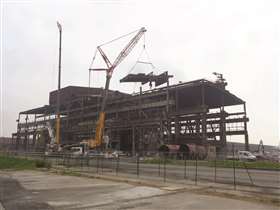 This large steel mill in Ospitaletto, northern Italy, went bankrupt and was purchased at auction by a very well-known supermarket chain, Esselung, which promised to take care of the demolition with zero environmental impact.

Despe won the tender because it offered an absolute guarantee that there would be zero environmental impact and promised to carry out the job with minute precision and the utmost care. The request was to demolish 940,000 sq m (10.1 million sq ft) in only six months. 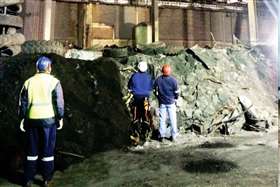 Unit 3 boiler at electricity utility Eskom’s 3,600 MW Duvha Power Station in Mpumalanga experienced an over-pressurisation event, resulting in irreparable damage to the boiler structure and associated equipment. The contract for demolition of the coal-fired boiler and ancillary equipment was awarded to Jet Demolition with the key requirements being safe, controlled and rapid removal of the damaged 600 MW boiler to facilitate later replacement.

Liberty Industrial carried out the demolition of a coal stacker and reclaimer at Port Kembla to make way for new machinery as part of a broader terminal restoration project.

Normally, for a demolition of this nature, a complete shutdown of key operational assets, such as coal conveyors, bunkers, and ship loaders, would have been required.

Liberty developed a demolition methodology that enabled all preparatory works to be carried out without disruption to the coal terminal’s operations, keeping shutdowns to a minimum.