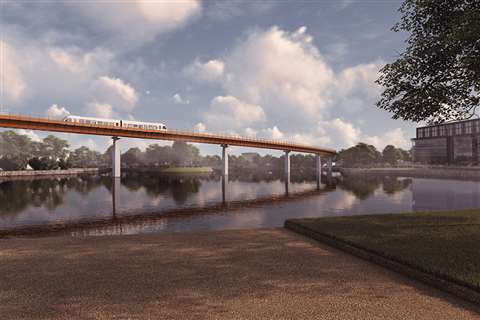 The CEOs of 22 major UK construction companies have written to chairman of the HS2 review committee Doug Oakervee, warning of the ramifications of cancelling the project, which is currently expected to cost close to €100 billion.

The first phase of HS2 would see trains running at speeds of up to 400kph, between London and Birmingham.

In the letter, as reported by the Financial Times, the bosses of companies including Balfour Beatty, British Steel, Jacobs, Mace and Skanska said the losses they would incur in the event of the cancellation of the project would oblige them to factor in political risk when tendering for future infrastructure contracts.

The 22 companies, who jointly wrote to Oakervee, reported potential losses in excess of €100 million, as a result of their respective HS2 bidding processes.

The chief executives said in the letter, “If HS2 is cancelled now, future construction projects across the piece will unfortunately attract an added risk premium. UK construction will cost more.”

As previously reported by Construction Europe, the UK’s transport secretary, Grant Shapps, recently confirmed that the estimated cost of delivering HS2 had now risen to €97.1 billion – a €28.2 billion rise from the previous estimate. He also said completion of the project could be delayed by as much as seven years.

UK Prime Minister Boris Johnson announced the review of HS2 last month, but said he would “hesitate for a long time” before considering the cancellation of the project.

Jon Hart of law firm Pinsent Mason said contractors could be entitled to some degree of compensation if HS2 is scrapped, but added that they could nonetheless face significant losses.